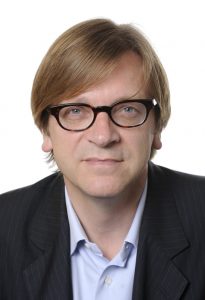 Mr Guy Verhofstadt, former Belgian Prime Minister and leader of the Alliance of Liberals and Democrats for Europe (ALDE), will be delivering a keynote speech at ECSA’s 50th anniversary gala dinner on March 4th – one of the European Shipping Week’s major events.

His confirmation comes only weeks after Ms Violeta Bulc, European Commissioner for Transport, indicated that she would be speaking at the European Shipping Week’s main conference, joining an impressive line-up of some of the most important names in shipping as well as top-level EU officials and prominent journalists.

Mr Verhofstadt said “The competitiveness of our shipping industry is an important, if not vital, element in the recovery of the European economy. This event is an excellent occasion to debate this issue with the different stakeholders involved.”

The gala dinner is organized to celebrate half a century of ECSA’s contribution to the formulation and promotion of European shipping policy and as such will be an event bringing together ECSA’s members on the one hand plus members from the European institutions and key stakeholders on the other.

The European Shipping Week is a week-long series of events that aims at raising the EU shipping industry’s profile, allowing EU decision makers to get acquainted with its numerous facets and intricacies while promoting useful exchanges between politicians and business representatives.

European Shipping Week is the brainchild of the European Community Shipowners’ Associations and will feature a variety of high-level events.

For more information about European Shipping Week and details about how to register for the conference, gala dinner and range of shipping events running during the week, go to: https://www.europeanshippingweek.com