ABP inspires engineers of the future 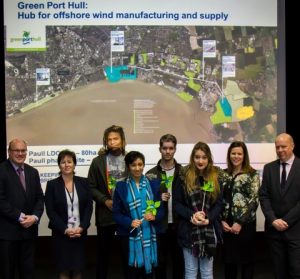 Students at Wilberforce College in Hull were given the chance to find out about employment opportunities offered by Associated British Ports (ABP), as well as how their future will be shaped by Green Port Hull during a presentation by Simon Brett, ABP Head of Projects, Humber.

The talk was given to the college’s engineering, maths and science students, and was the first talk ABP has delivered in a local school or college. It is also one of many events the college intends to hold to help its students gain an understanding of how the ports, logistics and renewables industries operate.

In 2014 Wilberforce College cemented its commitment to embracing the growing Humber renewables industry with the opening of a new engineering workshop, which allows all BTEC Engineering practical training to be completed on site.

She said: “I am delighted that Simon Brett is developing relationships between the students at Wilberforce College and ABP in Hull. By making them aware of the extensive investment projects being undertaken at Green Port Hull and the career opportunities that will arise, it will inspire them to aim high in their studies and see the practical application of the courses they are taking.

“Hull’s youngsters will play a pivotal role in the growth of the region’s renewables sector. The multi million pound joint investment by ABP and Siemens in developing offshore wind turbines and renewable energy sources will require a highly skilled workforce. It is essential for our students to prepare now for careers in this industry to take full advantage of future opportunities.”

Simon Brett, Head of Projects at ABP, said: “It’s fantastic to get out and meet the young people who might eventually work on one of the Green Port Hull projects, and talk to them about renewable energy and the importance of the Humber estuary to the sector, as well as employment opportunities within ABP itself.

“This is an exciting time for Hull and the wider region and it’s great to share that positivity with the people that will ultimately benefit.”

Sam Carmichael, a Wilberforce College student who attended the talk said: “I found today really interesting, it gave us a great insight into the industry developments happening on our doorstep and it’s really encouraging to know that we’re being invested in.”

Wilberforce Sixth Form College is based on Saltshouse Road in Hull. It was established in 1988 and has grown to cater for over 1650 students working towards GCSEs, A levels, BTECs and City and Guilds qualifications.

The Port of Hull handles 10 million tonnes of cargo per annum and is the is the focal point for the development of the UK’s largest offshore wind turbine construction, assembly, and service facility, as well as well as a rotor blade manufacturing facility, which will be located on the Port’s Alexandra Dock. This development represents a £310 million investment and will create up to 1000 direct jobs.