Gypsy music is so powerfully moving that it takes on a life of its own, reaching an audience far beyond the Roma who originated it. With her romantically-named enterprise Magic Violin, London-based musician Gundula Gruen is winning new followers for her interpretation of the colourful and exuberant genre, blending her discoveries of musical rarities with better known traditional melodies and inspired improvisation.

She is shortly to announce 2015 dates for her independent show From Russia with Love, which will be an enchanting panorama of music and dance based on resilient Russian Gypsy themes through the decades.

Gundula’s musical technique and her passion for the musical heritage of the Gypsy world is reflected in the magic of her superb violin performance (hence her choice of stage brand name), her singing, her dancing, her skills as a costumier (she makes many of the special outfits for herself and her fellow entertainers), and her production élan.

There is already a permanent memento of the heady mix of talents of Gundula and her collaborators in the form of a CD,  The Devil’s Lentil Soup, by Tatcho Drom, a group which she formed five years ago, and whose name means “the true journey.” Here the range of Gypsy expression, from the sentimental to the rhapsodic, is in full bloom: the disc includes refashioning of Transylvanian dances, Hungarian Gypsy song, southern Romanian dance, Russian Gypsy song and dance, Macedonian song, Albanian love lyrics, and Sephardic Ladino love song. The numbers are rounded off by an original song about the drastic gastric effects suffered by the Devil when he wolfed down too greedily Grandma’s spicy lentil soup. The array of pieces on the CD “captures the earthy energy of folk and inflects it with the voices of classical, contemporary and jazz, ” according to the sleeve note. 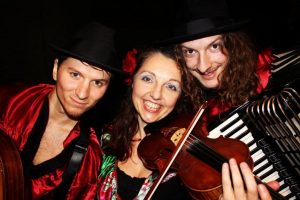 The music is by turns fiery and soulful, and it does not take much imagination (and only the effort of finding the YouTube video) to visualise the ensemble performing in bright, handcrafted Russian-style Gypsy costumes.

The violin virtuoso draws her material from a wide geographical area of East Europe and the Balkans, from her own researches and from recorded ‘finds’ of Roma and non-Roma pieces unearthed and brought to her by friends and acquaintances. “Often, there are old tapes that people had forgotten about, and they only recall them when I talk to them about my curiosity for this heritage. Such recordings have ‘vanished’ as far as the world at large is concerned, so for me they are real treasures.” On stage, the content of these discoveries is turned into uplifting instrumental spectaculars with bravura passages, flowing harmonies, distinct choreography and topped off with the gorgeous attire integral to the sensual Gypsy atmosphere.

Gundula’s new show will draw its impulse from what she calls “olden times” – folk music rather than art music – the dream-fantasies crystallised in Soviet films from, and about, the 1930s, imbued with fresh immediacy and deep commitment.

In the Thirties, many Gypsies in Russia were nomadic horse traders and singers, and part of peasant life. After a grim period of state repression including exile to Siberia and executions, many Roma enrolled in the Red Army in World War II and they entertained the troops in their dire deployments.

Marianna Smirnova-Seslavinskaya, director of the Russian Centre for Roma Culture Research, says in her book The Gypsies that Russians, being romantic at heart, are enchanted by Gypsy music. 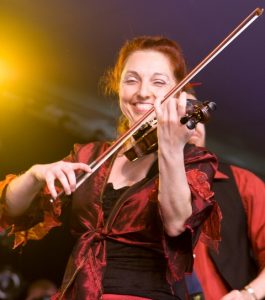 Gypsies, or the Roma people (a term that is nowadays preferred), are a nomadic race originally from Punjab in today’s northwest India. They started migrating through the Middle East into Europe, where some evidence of their presence can be found from the 11th century onwards. Because of their lore and unusual ways of life, they faced discrimination throughout their whole history. They were brutally persecuted , especially in England, Prussia and central Europe, and were to suffer further in the Holocaust, with up to a million killed.

Gypsy musicians were usually viewed more favourably, as their outstanding skills and charismatic manner of performing earned them wide appreciation. In the 18th and 19th century, many Gypsy musicians in Europe enjoyed the patronage of the middle class and aristocracy.

Gundula has spent more than 15 years researching the music and customs of Gypsy communities, learning songs and instrumental pieces from Roma musicians the traditional way, by ear. Many of those pieces have been handed down through generations, fathers teaching their sons and so on. The origin of the music is not always known. The repertoire could include some transformed version of traditional village dances, or a theme of a movie adapted into Roma style. “I often do not know the background of the pieces I am being taught: this is partly because of language barriers, partly because the musicians I learn from might not know or think about it themselves. Sometimes I become the object of what is a common game among Roma people to make up stories. To me, such a story they might make up on the spot for me is just as authentic as the truth, as it is a part of Gypsy custom, ” she says.

Her accumulated insight is invaluable. “The way I arrange music contains a lot of the context from which I discovered it.”

Does she soften the earthiness of the music as she arranges it? “Rather the other way: my arrangements often differ from the raw traditional piece. I think I manage to preserve the traditional energy and certainly keep any special harmonisations and embellishments alive, but I often do put the piece or song  in a new context, it may contain artistic and possibly theatrical elements. Some songs however I keep quite pure, with minimal arrangement, as their beauty lies in their simplicity.”

Nowadays in the 21st century, even in remote places, where the traditions have survived well, the heritage is in danger of being diluted and lost. Across the Balkans, the chain of fathers teaching their sons starts to be broken by the replacement of the traditional instruments with keyboards, electric bass and a drum machine; “if you are lucky, you see an accordion. Hearing what they do is for me painful. They turn the volume up far too much.”

She says: “Certain traditional Eastern European and Balkan Gypsy and folk music styles employ, to Western ears, very unusual modes. Musicologists try to trace these back to influences from Turkish invasions, and to remnants of Indian music styles, which the Gypsies brought along with their migration. In Hungary and close by, you also find an amazingly complex harmonisation. My musicians often feel quite challenged to play a string of finger-breaking chords in very quick progression. Another stylistic element is the use of very rich and intricate embellishments. In the Balkans and Russia, most accordionists play on button accordions (with a wider range and more felicitous fingering than the piano accordion we are used to in Western Europe and the US) which produce a better result for this style of music. Often one finds a preference for fairly penetrating sounds, which is quite useful when playing for a village dance without amplification. Many countries have their own variation of bagpipes.”

Thankfully, says Gundula, in the villages of Romania and Hungary you still find virtuoso violinists who continue the tradition, and in restaurants in Budapest and elsewhere one can, next to the ‘Gypsy music for tourists, ’ also hear older styles which ensures the tradition survives.

She has travelled extensively in Eastern Europe, learning from Gypsy masters of the craft such as Caliu from the famous Taraf de Haïdouks and Tcha Limberger. She loves {the former Yugoslav republic of) Macedonia for its rich folk and Gypsy music traditions, which contain the most beautiful songs and instrumental melodies. In the republic, the Roma are the third largest minority, and have dedicated education, television, radio stations and political parties. Gypsy weddings have been described as “the soundtrack of Macedonia.”

Born in Augsburg, Germany, Gundula graduated as a classical violinist from the Leopold Mozart Konservatorium and obtained a postgraduate degree in jazz at the Richard Strauss Konservatorium in Munich.

She founded and led the group ZiG, which featured a Serbian accordion player; and the London Gypsy Orchestra of 45 musicians which she directed until mid-2014. Gundula has annotated dozens of tunes for student musicians in her Gypsy Music Collection book and CDs published in versions for various instruments by Spartan Press. She has been told: “When you play, I can hear the history of Romany music which is becoming lost for the Romany people.” This is the tribute paid by Roma activists, such as Ragip Jasharaj, who is himself working hard on preserving and archiving Roma history and culture.

In the course of her research, Gundula has found that one of the first ‘primas’ of Hungarian Gypsy bands (the prima being the lead violinist/conductor, therefore having a similar role to that taken by Gundula) was female. Her name was Panna Czinka and she was active in the 18th century. That was an extremely rare instance of a woman instrumentalist in Gypsy music. Even today that is unusual – there are woman as singers and dancers, but not playing the violin or any other instrument.

Gundula has featured in radio and TV productions and performed at Russian occasions in the West, including recently the sixth annual reception organised by the marine division of Russian insurer Rosgosstrakh for the London insurance market. At the event, at a venue in Leadenhall Market, her violin and vocals were accompanied by Josh Middleton on accordion, Jamie Le Mercier on guitar, Natasha Kvach on vocals, and dance from Saeeda Kasymova and Tamas Ferencz.

Gundula told the City guests: “The special point about Russian Gypsy music and dance, in comparison to other Gypsy music, is that it has been developed into an art form. Nowadays, Russian Gypsy musicians have mostly conservatoire education, and dancers have classical ballet training – the genre is highly virtuosic, full of passion and soul, and just as colourful as the costumes.”

ABP inspires engineers of the future

Music: Maria Makraki spells it out – an...