Mr Croft, a semi-retired general and vascular surgeon and who is Dean of Clinical Studies UK for St George’s University School of Medicine in Grenada, West Indies, published a book in November 2014 entitled Churchill’s Final Farewell – The State and Private Funeral of Sir Winston Churchill.

Members of the Churchill family were on board the Havengore, as it passed under the bridge on January 30 2015. The former Port of London Authority launch had borne Churchill’s coffin at it sailed down the river in 1965. 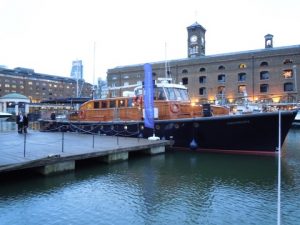 The honour accorded to Mr Croft, who lives in Essex, came about after an article about his book appeared in a local newspaper which an employee of the Corporation of London read on his way to work and showed to his superior.

Referring to their records, Corporation officials found that Rodney Croft was a Liveryman in the City of London of the Worshipful Society of Apothecaries and in 1982 had been made a Freeman of the City, and that he had served as a Surgeon-Lieutenant Commander aboard HMS President,  London Division Royal Naval Reserve (1975-83).

When Mr Croft was contacted by a representative of the Corporation and informed they wanted him to halt some of London’s traffic on January 30 he at first thought they were alluding to the age-old tradition, now frowned upon by the Metropolitan Police, of herding a flock of sheep over London Bridge. The Corporation quickly made it clear they were inviting him to take the controls of Tower Bridge to raise it in salute to Sir Winston Churchill as Havengore passed through. Mr Croft said that when he heard that, he nearly dropped the telephone!

On the day, Rodney Croft accompanied by his wife Hazel-Ann, two sons and daughters-in-law arrived at the North East Control Room of Tower Bridge and was briefed on the procedure by the Bridge Master. At 12.40,  Havengore cast off fromHMS President downstream from Tower Bridge. The bridge-raising procedure then began. Using the Tannoy system, Mr Croft made the announcement to clear the bridge, after which the road and pedestrian gates were closed. The four pumps, one at each of the base of the Towers were switched on and emitted a soft humming sound; the remainder of the forthcoming manoeuvre was silent… 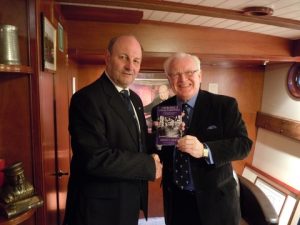 Rodney Croft presents a copy of his book to Havengore owner Chris Ryland in his cabin.

Following the order of the Bridge Master, Mr Croft pulled back the black lever on the control panel and the 1, 100 ton bascules began slowly to move upwards.

As the lever was fully depressed, Mr Croft enquired on what occasions were the bascules taken to their full elevation, to which he was informed that this honour was for a monarch and usually they are elevated to around 45 degrees. “But today for Sir Winston?” Mr Croft asked, “Can we go all the way?” The reply was affirmative! As Havengore passed under the bridge, the bascules were at their full elevation; the greatest salute which can be granted by the Port of London Authority.

Once Tower Bridge was lowered, Mr Croft was presented with a commemorative certificate citing his raising the bridge on that most memorable day with its glorious tribute to Sir Winston from the City of London and the Port of London Authority.

The Havengore with members of the Churchill family on board then sailed towards the Houses of Parliament where a river service was held and a wreath was cast on the Thames in memory of Sir Winston.

Rodney and Hazel-Ann Croft before setting off for Tower Bridge ceremony. Photo by Alex Croft.

The Havengore, named after an island off the coast of Essex, was built as a hydrographic survey launch by Tough Brothers of Teddington in 1956. The Havengore went on to become the longest serving PLA vessel, before being decommissioned in 1995 and afterwards bought by a businessman and restored at Chatham Historic Dockyard. Among other functions, the vessel carried members of the Royal family during the Jubilee celebrations of 2012.

Mike Lawley, a former executive at Kuehne+Nagel, has vivid recollections as a young man watching the Churchill funeral procession.

He said: “I was working at Schenkers London, Finsbury Square office, on the day of the funeral and attended it down by the Tower of London.

“The ancient cranes were (just) still working at that time as the Pool of London was still used to load coasters and barges. It was the end of an era and by the time two years later I returned from working in Germany, the Pool was closed and the cranes were being dismantled to make way for the property developers.

“The spectacle on the day of the funeral as they dipped was stunning and a wonderful tribute to the great man. You could have heard a pin drop, it was all very emotional. I was glad to have been there.”

On returning for working for Schenkers in Hamburg from 1966-68, Mr Lawley was senior sales executive for Kuehne+Nagel, then head office sales manager.