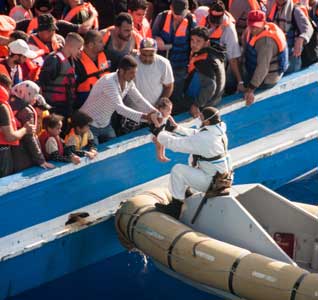 Following the events of recent days in which more than 2000 migrants were rescued from the Mediterranean Sea and several hundred lost their lives, International Maritime Organization (IMO) Secretary-General Koji Sekimizu today (Monday 16 February) called for more concerted action to address the issue of criminals who organize illegal and unregulated sea passage by migrants, putting thousands of lives at risk.

“We do not seek to prevent migration. People have the human right to migrate. But it is time to stop illegal, unregulated passage arranged by people smugglers. Not only do they put the lives of the migrants in danger, they also endanger the rescue services and merchant shipping which take part in the rescue operations. Something needs to be done against the smugglers or the situation will not improve. It is placing an intolerable strain on rescue services and on merchant vessels, ” Mr. Sekimizu said.
Mr Sekimizu noted with appreciation the efforts made by Italian and other authorities in the most recent rescue operations over the weekend. However, he drew attention to the fact that more than 200, 000 people were rescued and more than 3, 000 reported to have died in unsafe, irregular and illegal sea passages on the Mediterranean during 2014.
“This is a serious issue for IMO and a humanitarian tragedy. There is a strong tradition of search and rescue at sea and this will continue but the search and rescue services provided by a number of countries are overstretched. Even with the contribution of the Italian Navy and Italian Coast Guard, more than 600 merchant ships were diverted last year to go to the support of persons in distress at sea. This is beyond acceptable limits and without the Italian efforts many more would have died. The efforts of Italian rescuers – and others – are greatly appreciated but we have reached the point where we need to focus more effort on the prevention side.”
IMO will host an inter-agency meeting on the Travelling of Migrants by Sea on 4 March 2015, with the expected participation of the International Organization for Migration (IOM), the United Nations High Commissioner for Refugees (UNHCR), the United Nations Office on Drugs and Crime (UNODC) and the Office of the United Nations High Commissioner for Human Rights (OHCHR), Interpol and other organizations and members of the Global Migration Group as well as interested Member States and shipping industry bodies.
The high-level inter-agency meeting will seek to build on the momentum gained at the UN High Commissioner for Refugees’ Dialogue on Protection Challenges held in Geneva on 10-11 December 2014. It is envisaged that the meeting will develop potential ways forward both by individual agencies and through the Global Migration Group. Mr Sekimizu said that consideration should be given to establishing a database of incidents to help law enforcement agencies to identify, arrest, prosecute and punish smugglers. Greater control over coastal zones and ports so that people do not travel on board unsafe boats was also important, he said.
“I firmly believe that there is scope for greater efforts by the international community to better manage the process of migration, ” Mr Sekimizu said.
___________
Links:
UNHCR, IOM, IMO, UNODC and OHCHR Joint Statement on Protection at Sea in the Twenty-First Century (10 December 2014)
Rescue at Sea: A guide to principles and practice as applied to refugees and migrants (IMO, UNHCR, ICS)
Global Migration Group