Bringing together the world of art in the UK and China…

Bringing together the world of art in the UK and China: new magazine ART.ZIP makes unique contribution

A lively arts magazine has carved out an important niche in the international cultural scene. ART.ZIP has reached its weighty 12thprint issue in the role it has assumed as “the first bilingual contemporary art magazine dedicated to bringing together the world of art in the UK and China.”

Distributed in both countries, the independent publication sets out to “showcase the current best in art, from industry veterans totomorrow’s innovators” and to provide insight into other sectors of the creative sphere. This includes fashion, design, music, advertising, architecture, cinema, and more.

Under editor-in-chief Harry Liu and executive editor Michelle Yu, the magazine is dedicated to promoting the overall arts scene, striving to avoid falling into the trap of being mesmerised by the ‘celebrities’ who command the column inches in much of the press. Contributors lend their considerable talents to original writing and exclusive interviews with artists, which is greatly to the magazine’s credit at a time when many publications devote few resources to anything beyond regurgitating press releases.

The result is excellent coverage throughout bumper numbers of pages, of independent artists and galleries in addition to the mainstream.

The advent of ART.ZIP has echoes of the rise of China as the leading market for contemporary art purchases, the past few years having seen record prices at auctions in China, Hong Kong and other centres. As more Chinese people travel overseas, their interest in art movements and trends elsewhere is developing fast. Even for middle-class stay-at-homes,  the popularity of Western lifestyle and art has grown rapidly.

According to Artprice, an organisation that monitors the contemporary art market, in the 12 months to July 2014 sales of contemporary art at public auctions reached a global total of nearly $2.05bn, up 40% on the previous period. “As many pieces are being sold in China as in the US, UK and France together, ” said Artprice in its annual report.

In the new, 178-page issue of ART.ZIP,   the many topics include the Young Vic production The Valley of Astonishment; an interview with Leo Warner, creative director of design company 59 Productions; Exhibit B, a site-specific exhibit about racism and European colonialism in Africa which was to have been shown at the Barbican but which was withdrawn because of “extreme protests” and “the serious threat to the safety of performers, audiences and staff”; an interview with Joseph Seelig, co-founder of London International Mime Festival; the 40th anniversary of Puppet Centre, with an interview with Penny Francis, co-founder of the Centre which encourages the use of puppetry in outdoor arts, carnival, dance, opera, screen animation and theatre; and a screening of the classic Chinese 1933 silent film The Goddess with a new musical score by Chinese composer Zou Ye which was performed by the English Chamber Orchestra at the Queen Elizabeth Hall in London, 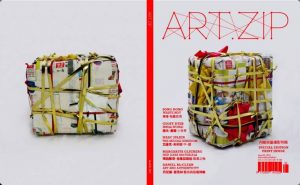 Cover of issue 5 of ART.ZIP.

Focus in the new issue is on “visual theatre, ” as opposed to the more traditional “literary theatre” which goes back principally to Shakespeare.  Visual theatre includes especially since the 1970s mime, puppetry, physical theatre and contemporary circus. Harry Liu wrote that the edition sought to address “the significant and subtle influence this ‘alternative theatre’ has on the development of contemporary art and theatre.”

In the previous issue, the magazine took as its theme Artists Live and Work Here. For most people, said Harry Liu, an artist’s studio is a place of mystery, the birthplace of numerous great works of art and romance. London alone is reckoned to have 85, 000 sq m of studios, according to the most recent survey. ART.ZIP representatives visited British artists in their studios and heard from them “what the significance of such a sacred place is.” Their report covered some 80 pages of the issue.

Among major events featured in Issue 11 was the British Museum exhibition Ming: 50 Years that changed China which ran from September 2014 to January 2015. The commentary noted that the period 1400 to 1450 for China was one of extraordinary engagement with the world, with the explorer Zheng He sending treasure ships to southeast Asia, the Middle East and Africa.