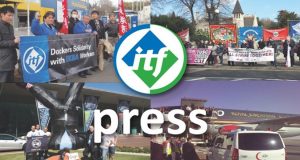 The ITF (International Transport Workers’ Federation) has submitted a deposition to the US Coast Guard’s consultation on seafarers’ access to maritime facilities – the Notice of Proposed Rule Making. The submission supports the USCG’s efforts to improve the shore leave/access situation for seafarers while upholding the nation’s security needs.

Submissions have been made from across the industry, including from the AMO, MM&P, MEBA and SIU trade unions, the Chamber of Shipping of America and the seafarers’ welfare organisations.

The ITF applauds the Coast Guard’s current regulatory effort in promulgating this long overdue and imperative proposed rule which will require each owner or operator of a facility regulated by the Coast Guard to implement a system that provides seafarers and other individuals with access between vessels moored at the facility and the facility gate, in a timely manner and at no cost to the seafarer or other individuals. For too long, seafarers, especially non-U.S. crews, have been denied or restricted access to shore leave. Although we certainly acknowledge and fully support the need for port security, denial of unimpeded and unduly restrictive access for seafarers to maritime facilities has not only proved detrimental to the health and emotional security of the mariner and diminished their quality of life, but may have in many instances hampered continued efficient vessel operations and the maritime transportation system itself.

As a non-governmental organization to the International Maritime Organization, the ITF fully participated in deliberations that drafted the International Ship and Port Security Code (ISPS) initiated by the United States after the unimaginable and horrific September 11, 2001 terrorist attack against American citizens on American soil. Support for the Code was overwhelming in the realization that the security of all nations was vulnerable. As a result, the 2002 Code forms the basis for the current port and vessel security system worldwide. Notwithstanding the overall security benefits of the ISPS Code, the security regime has over the years created a number of problems for the merchant mariner – one which is the subject of this proposed rule.

The submission goes on to note that ISPS implementation has not been consistent across the US:

For example, current regulations (33 CFR 105.200(b)(9)) require facility owners to “coordinate” shore leave for vessel personnel. In our view, the use of the word “coordinate” does not accurately reflect provisions of the ISPS Code which requires facility owners and operators to “facilitate” shore leave for merchant mariners. The current phraseology changed the intent of the ISPS Code herein and created a non-conformity or loophole which permits port facilities to avoid their obligations to seafarers and vessels in a security regime. The proposed rule amends the current rule by changing the words “coordination of a system” to “implementation of a system.” The ITF recommends current 33 CFR 105.200(b)(9) be amended to reflect concise language found in the ISPS Code, i.e., facilitation of a system. Ensuring facilitation will, in our view, effectively close this significant loophole in implementing the intent of the ISPS Code.

After reviewing the recent history of shore leave post 2001, the submission goes on to say:

This historical perspective leads the ITF to commend the Coast Guard in this current regulatory effort and notes that the proposed rule addresses many of the concerns of the national and international maritime seafaring community. The ITF has been engaged in the access to shore leave issue since 2001 and is pleased that the Coast Guard has responded favorably to the concerns of the seafarer. We are pleased to support the tenets of the proposed rule with certain clarifications and modifications. Several clarifications have been suggested heretofore in the earlier portion of these comments. With several further changes to the proposed rule, we believe that an equitable balance will be struck between maritime security and the human dignity of seafarers.

The ITF recently welcomed the progress made at the ILO on the issue of shore leave and seafarers’ identity documents. See www.itfglobal.org/en/news-events/press-releases/2015/february/itf-welcomes-shore-leave-progress for details

City of Sails ready for arrival of Volvo Ocean Race, thanks to GAC Pindar

Bringing together the world of art in the UK and China…

Capes’ fall: a tempo hiccup or a summer...