The Greek Press Association’s dinner last week, 4 March 2015, proved to be a first class gathering of philhellenes and distinguished London Greeks, confirming its status as one of the top annual social occasions in the capital.

Mr Robertson, who is head of the Doughty Street Chambers and the team that is preparing the case for the return of the Parthenon Marbles from the British Museum to the New Acropolis Museum in Athens, spoke passionately about his objective.

With the end of March deadline set by UNESCO for the British government to respond to the international organisation’s offer to mediate between London and Athens coming up, Mr Robertson rejected the UK government’s official position that the Marbles are a matter for the BM trustees. “Who signed the export permits for the statue of river God Ilissos to be transferred to the Hermitage in St Petersburgh? Who appoints the majority of the trustees?” he asked. 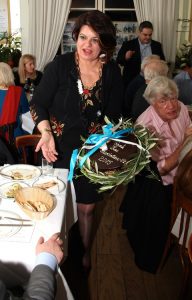 He also outlined what he called the “Navarino syndrome”, a fear of being rude to the British, to whom successive generations of Greeks are eternally grateful for having helped to kick out the Turks at the Battle of Navarino in 1827, and the Nazis 118 years later.

The charismatic barrister pleased his fellow diners even further by responding with a “why not” to calls for his teammate in the Greek case Amal Clooney to attend next year’s Greek Press Association bash.

Asked to present her biography of the great travel writer Patrick Leigh Fermor titled ‘An Adventure’, Artemis Cooper described his wartime exploits in Crete and his life in the Mani, where he lived for over forty years. “Although he was unmistakably British, ” she said,  “he felt more relaxed, fulfilled, and alive in Greece than he ever did in his own country.” 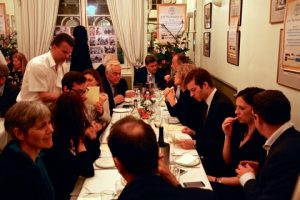 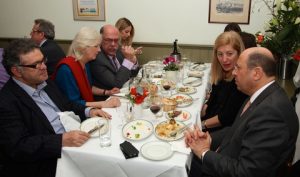 In her welcoming speech, Mrs Crhysomallis said that the Association aims is to bring together Greek, Greek Cypriot and British journalists and develop a strong and productive co-operation among them; also, to encourage the UK Greek residents to become more interested in British politics.