As part of HELMEPA’s new Educational Community and Public Awareness Campaign, the Exhibition “Marine Environment – Shipping – Sciences” was officially opened in the city of Thessaloniki yesterday, Wednesday 11 March 2015. The inauguration took place in the Bissell Library of the American College of Thessaloniki (ACT), an Anatolia College member. The Campaign is financially supported by UK independent charity, the Lloyd’s Register Foundation (LRF)* and is being carried out in Thessaloniki under the auspices of the Municipality.

The Consul General of the USA in Thessaloniki, Mr. Robert Sanders, representatives of the Mayor and the Central Port Authority of Thessaloniki, as well as other various stakeholder representatives and AnatoliaCollege academic and administrative staff, all honored the event with their presence. 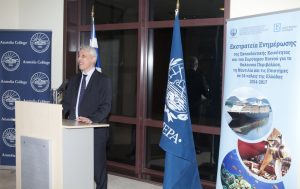 During his address, the host, Dr. Panos Vlachos, President of Anatolia College, highlighted the fact that the College aims for its students to become responsible members of the community who grasp the significance of protecting the environment. The Anatolia-HELMEPA collaboration is long-standing, he continued, and will remain so in the years ahead.

HELMEPA’s Director General, Mr. Dimitris C. Mitsatsos, thanked the LRF for its support and AnatoliaCollege for its hospitality. In giving the audience a brief overview of HELMEPA’s journey, he underlined that the Association’s objective remains, since its inception in 1982, the raising of awareness of the human element in shipping and of the broader community in general, so that we may preserve our environment in the state nature itself has determined.

Mr. Theodosis Stamatellos, Area Marine Manager, Greece, East Mediterranean and Adriatic, at Hellenic Lloyd’s S.A., referred to the LRF’s mission, stressing the fact that in order for change to come about and to protect our seas and our environment, we must first address children directly about these matters, as it is they who are our future.

City of Thessaloniki Appointed Advisor for Transport, Environment and Sustainable Mobility, Mr George Dimarelos, repeated what the Mayor said that “the city of Thessaloniki, a seaside city, has turned its back on the sea” and for this reason, the Municipality of Thessaloniki cooperates with HELMEPA because it believes in educating children towards helping them develop good environmental behaviours for the future. 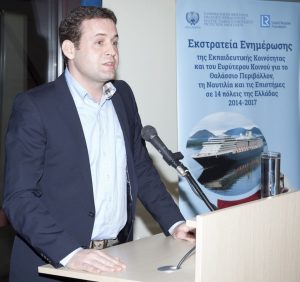 Ms Maria Dokopoulou, representative of the Institute of Educational Policy of the Ministry of Culture, Education and Religious Affairs, mentioned Charles Darwin and how he insisted that it is “the fittest who survive in nature” and so, she said, in a changing world, students need a variety of contemporary skills, something which HELMEPA’s educational programs provide and equip them with.

The Exhibit, which was opened by Messrs Vlachos, Stamatellos, Dimarelos and Mitsatsos, will remain in the city of Thessaloniki until 26 March 2015 and will be visited by over 1, 000 students from public primary and high schools as well as from Anatolia College.

On Thursday, 26 March 2015 between 5pm and 8pm and in the same space, HELMEPA will run a ‘Train the Trainer’ Seminar for Teachers titled “Seas and Humans: Ensuring a Sustainable Future”.

n closing, the Campaign will continue across a further 13 cities throughout mainland Greece and the islands and will be completed in November 2017.

BMF members have been celebrating apprentices this National Apprenticeship Week