Angie Redhead is WISTA International Personality of the year 2014! 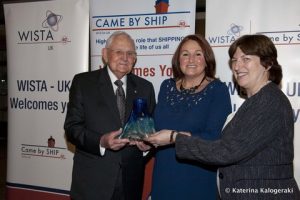 At the mezzanine floor of the IMO at the banks of Father Thames in London, the administrative capital of shipping, WISTA-UK members and friends from all over the globe- 40 plus nationalities, honoured Angie Redhead, the Liverpool Cruise Terminal Manager, who won the prestigious award for 2014!

A great honour for women, for WISTAs worldwide as Angie holds a unique position, a very delicate one indeed where patience, precision and humour is the name of the game!

We manage to get a clear video and here is what she said:

Sue Terpilowski OBE, and head of Image Line, the new WISTA-UK President introduced the event and Bridget Hogan, the very eloquent Secretary-General of WISTA and The Nautical Institute’s Director of Publishing & Marketing did the rituals; an excellent performer as always! The award was given by the iconic William O’Neil, who was Secretary-General of the IMO for 14 years and a great supporter of WISTA.

We also managed to have Mr. O’ Neil on video, so here you go:

The towering Jim Davis, Chairman of IMIF and WISTA-UK Ambassador with his wife Hanny was there too, Canon Peters from the Mission to Seafarers as ever present, members from the IMO delegations, George A. Tsavliris and his wife Zoe, the Italian Representative to the IMO Rear Adm. Aliperta with his daughter Valeria, former WISTA-UK president Maria Dixon with her daughter Stephanie and new born grandaughter Lexia (three generations ensemble), ClassNK UK head  Dr. Abdul Rahim, Regional Manager of Europe and Africa, the  ever present Dane Inge Mitchell, a strong team from Image Line Communcations with Tom Waters, Patrik Weater and Emma Niven…

A view of the right…wing

The west country and in particular the south west was also winning other awards, such as the one of CAME BY SHIP essay writing competition; excellent. The under 12 -winner was Ruby Smith from Weston-Super-Mare and Lydia Pallot for the over 12s who also attended the event; the prize was presented by Guy Platten CEO of the Chamber of Shipping.

Another awards was given to Teresa Stevens of Guardian Maritime Limited, her husband and business partner David being more than delighted for their work on the innovative safety systems for ships prohibiting pirate intrusions.

Here is what Teresa Stevens said:

Sue Terpilowski also announced the winners of the Photographic exhibition’s best …perky captions and thanks to all participants and contributors, and a special one to the all-women Jeanius Consulting team headed by Jean Winfield! THe winners of the Caption Competition were: Lucy Budd, 2nd winner Rebecca Watson, 3rd winner Dannielle David and 4th winners Lucy and Lauren. Now how about men-in-WISTA….eh! The main man helping and doing most of the talking was Ewen Macdonald, from Seavision; well done!

Excellent dips and drinks, networking, the basic ingredient for WISTAs to the fore and we will bring you soon all that happened there in the next updated reporting; watch this space!