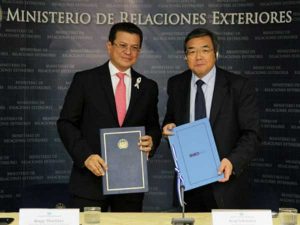 24/03/2015 A new agreement on supporting the Republic of El Salvador to implement IMO treaties was signed in San Salvador on Monday (23 March). IMO Secretary-General Koji Sekimizu, who is on a visit to central America, and the Minister of Foreign Affairs of El Salvador, Hugo Martinez, signed the Letter of Understanding on technical cooperation between the Government of El Salvador and IMO, which outlines the intention of IMO to assist El Salvador in implementing important IMO international conventions, including the MARPOL,  OPRC and STCW​ treaties. (View photos and video here​.)

During his visit to El Salvador, Secretary-General Sekimizu paid a courtesy visit to the Vice President of the Republic, Oscar Ortiz, and held meetings with officials from the El Salvador Maritime and Port Authority and the Ministries of Transport and Foreign Affairs. Mr. Sekimizu also visited a seafarer training centre and the UNESCO World Heritage Joya de Cerén Archaeological Site.

Secretary-General Sekimizu is continuing his central America tour with visits to Guatemala and Honduras.