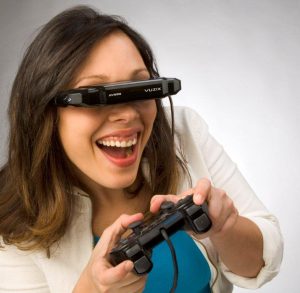 Experts have seen the future of ports, logistics and warehousing – through smart glasses. The sharper, hands-free focus of a new spectacle-linked tech product range is forecast to bring eye-opening efficiency savings to transport-related and many other industries and applications.

For the first time, NASDAQ-listed Vuzix Corp, which describes itself as the world leader in video eyewear technology, has demonstrated its investment proposition to the European financial community, in the course of presentations in London, Zurich, Geneva, Paris and Brussels.

While consumers globally have turned their back on a host of over-hyped wearable tech products in the last few months, the years-long intensive effort by Vuzix refining and getting its wearable offerings to market holds out prospects of a big commercial breakthrough, aimed primarily at potential users in the enterprise sector.

In contrast to Google, which stopped selling the first version of its Google Glass and closed its related Explorer programme at the beginning of 2015, prompting speculation that it would abandon the project, Vuzix (motto: View the Future) is pressing ahead in releasing by stages wearable technology for both industrial and mass consumer markets.

Wearable technology offers an exciting answer to the question “What’s next?” in the smart-phone space, according to Vuzix president and chief executive Paul Travers.

Mr Travers and his colleague Grant Russell (executive vice-president and chief financial officer) founded Vuzix (NASDAQ symbol VUZI) in 1997. Headquartered in Rochester, New York, the company has offices in the UK university city of Oxford, and in Tokyo, and is developing a growing international presence in deals involving technology majors. Its shareholders include Intel Corp, with a 24% stake bought recently for just under $25m at a premium to market. Based on revenue, Intel claims to be the world’s largest semiconductor chip maker, and develops advanced integrated digital technology and much besides.

Steeped in optical know-how, Mr Travers had left Eastman Kodak’s research department in 1988 to go independent, and he started the forerunner of Vuzix in the 1990s, at a time when the potential of video eyewear had yet to be understood. Mr Russell has had senior posts in companies in mining, oil and gas, technology, video gaming peripheral manufacture and software over the last 25 years

The initial focus of Vuzix was US defence markets, through the supply of head-mounted display systems. The company sold its military products division in 2012, to concentrate on the enterprise and consumer sectors. Vuzix today has 39 patents and 12 pending for its products.

Market intelligence company ABI Research has said that smart phones no longer represent the pinnacle in mobile devices—a new wave of wearable technology is reaching the market. A study by its analysts forecast that the wearable tech device market will grow to 485m units shipped annually by 2018. More than 75m of these would be wearable display or smart glasses, a market worth up to $15bn.

Google’s caution appeared to be a setback to such optimism, although the Silicon Valley giant’s chairman Eric Schmidt told the Wall Street Journal that its Internet-connected eyewear technology was too important to scrap and his company was supporting a long-term project. The Google Glass UK site says: “Thanks for exploring with us. The journey doesn’t end here. You’ll start to see future versions of Glass when they’re ready (for now, no peeking).”

Unlike Google, Vuzix targets the enterprise market, saying that millions of field service, warehouse, maintenance and other enterprise users will benefit from hands-free, smart glass solutions.

Vuzix has signed sales and partnership deals with a series of big names, including Lenovo, SAP, Nokia, and NTT Docomo. 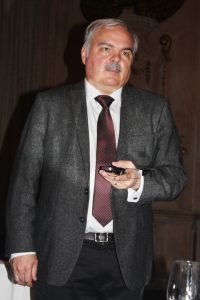 A landmark 12-month agreement has begun with Lenovo to sell across China a co-branded version of the Vuzix M100 Smart Glasses, described as the world’s first marketed enhanced hands-free smart phone wearable display with integrated camera. Lenovo has said that it is considering further partnerships with Vuzix on future products for China and elsewhere.

One of the most important commercial trials has been with DHL, the huge logistics company, to speed the process of moving boxes off the warehouse shelf to ship to the right customer.

Hands-free warehouse operations were successfully delivered to DHL through the use of Vuzix M100 Smart Glasses, along with warehouse “vision picking” software developed by Ubimax, a wearable computing specialist. The Ubimax order picking system – with real-time object recognition, barcode reading, indoor navigation and integration of information — was interfaced directly to the DHL warehouse management system. Increased worker speed, reduction of errors and improved flexibility of core processes added up to a 25% improvement in efficiency during the picking process. It benefited from the durability of the technology to stay switched on without recharging for the length of an entire working shift.A DHL site manager praised the system was “significantly better, compared to hand-held scanners.”

The success of the trial would seem to support the Vuzix contention that wearable technology will before long play a big role in supply chain operations.

The company’s high-resolution video eyewear, launched in 2007 and branded as  iWear, solves the main challenge in viewing video and digital information via portable and mobile devices – in other words, the small screen. Vuzix is preparing to release a new version, the Iwear 720, which are worn like regular glasses and give the impression of big-screen experience, and can be used with media players, portable DVD players, gaming consoles, cell phones and laptops. The company hopes to make iWear the standard mobile equipment for watching news, sports, music videos and movies, and for playing video games on the go. 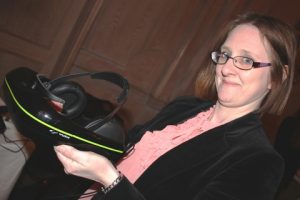 Vuzix also shared a glimpse of the future as it is beginning to solve the problem of producing a more fashionable, ‘sexy’ look for smart glasses, which for technical reasons with conventional optics have to date looked weird to most people. Vuzix-patented waveguide optics with frames that are less bulky and with a look and feel of fashion glasses are in the works. Mr Travers says that the company “will deliver on the promise that Google Glass tried to provide” with the first binocular fashion-wear smart glasses, to be shipped around the first quarter of 2016.  This will be “true eyeglass styling to ‘cross the chasm’ to the mass market.”

He adds: “When this happens, many people, especially the younger generation, will not go back to their phones.  This is game-changing stuff.”

Vuzix has partnered with the Open-Source Virtual Reality 80-company alliance, a new standard in gaming that provides hardware and software support, to align with its virtual reality products. Its new IWear 720 video headphones are said to be ideal for avid gamers. The headphones are compatible with almost any device supporting High-Definition Multimedia Interface output. The IWear 720 will also have optional 3D augmented reality cameras.

The company – its market capitalisation is $80m – has won awards for innovation each year from 2005 to 2014 at the Consumer Electronics Show in Las Vegas, and several wireless technology innovation awards.

While in Japan, Mr Travers went out to dine in a restaurant favoured by locals. He had no difficulty reading the Japanese-character menu – he just donned his smart glasses and enjoyed an instant translation of the food descriptions. Then he took the Tokyo subway back to his hotel, seeing the names of the stations and destinations automatically translated for him by just glancing at them.

Vuzix looks like a company that has been on the cutting edge for many years with technology that is now beginning to see the world appreciate.

Countries Get Serious About Wildlife Crime, Pledge Tougher Penalties for Traffickers and Kingpins

Free Port in Primorje to include 12 municipal territories