Free Port in Primorje to include 12 municipal territories 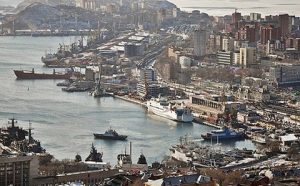 The Free Port in Primorje is supposed to include 12 municipal territories. A number of amendments has been introduced into the second version of the draft project, says the press center of the Primorsk Territory Authority following the round table meeting dedicated to the discussion of the draft Federal Law On Free Port Vladivostok held on March 27, 2015.

The revised version provides for the integration of the Free Port terminal with the priority development areas planned for the creation in Primorje and changes the functions of the Free Port’s management bodies.

The discussion will also cover the extension of the visa-free stay in the Free Port territory from 72 hours to 7 days. Business representatives say this period can be extended up to 10 days.

Russian President Vladimir Putin called on granting “free port” status to Vladivostok during his Annual Address to the Federal Assembly of Russia On December 4, 2014.

The draft law elaborated by the Ministry for the Development of the Russian Far East is under public discussion today. The list of the new Free Port residents can include not only ports but also the airport and companies of the tourist sector. Special economic conditions are to be created for 70 years with a possibility to extend this period.