HAMBURG/KIEL HSH Nordbank returned to profit territory in 2014 as projected, it passed the stress test of the European Central Bank with solid capital ratios and is now, following this earnings turnaround, aiming for structural changes.

HSH Nordbank’s results for the entire financial year 2014 were influenced in particular by good new business performance with stable margins and a decline in costs across the Group. In 2014, the substantial fees for the guarantee provided by the shareholders were largely offset by the capital protection clause. This factor also contributed to the Bank’s first full year profit since 2010.

The Bank with headquarters in Hamburg and Kiel generated net income before taxes of € 278 million (previous year: € -518 million) and net income after taxes of € 160 (-769) million. It is on course with its cost-cutting programme, and after an encouraging start to the year in operating terms it also projects a positive result for 2015.

“HSH Nordbank made a major step forward in 2014. We delivered as promised and our operations have substantially improved. It is now important that, working in close collaboration with our shareholders, we also initiate structural changes to ensure that HSH Nordbank is the strong regional bank in the North over the long term, ” said Constantin von Oesterreich, Chairman of the Management Board of HSH Nordbank AG.

The Core Bank, in which the forward-looking business areas of HSH Nordbank are pooled, put in an encouraging performance in terms of operating profit. New business increased by a quarter to € 9.5 (7.6) billion on stable margins. This increase also contributed to a rise in the Core Bank’s total assets to € 76 (69) billion. A boost came mainly from the real estate business and the Energy & Infrastructure division.

Beyond these sectors the low level of interest rates and good financial situation of medium-sized corporate clients led to a restrained demand for loans and financial services throughout the sector. HSH Nordbank bucked this difficult trend with corporate clients from the food, trade and healthcare sectors, where it consolidated its strong position. New business in shipping came to € 1.5 (0.9) billion, of which a good two-thirds were accounted for by non-German businesses. Mechanism of the guarantee weighed on Core Bank to a disproportionate extent in 2014

Nevertheless, during the reporting period of 2014 the Core Bank also had to shoulder a
series of non-operational and technical charges resulting from the complex calculation key
for the guarantee provided by the federal states of Hamburg and Schleswig-Holstein. The
guarantee took pressure off the loan loss provisions in the Core Bank in 2014 to a disproportionately
small degree and thus to a less commensurate extent with the actual causes. They
overshadowed the benefits gained from profitable new business, and the reported net income
before taxes of € -120 (-123) million does not reflect the Core Bank’s actual performance.

Against this backdrop, for the Core Bank the Management Board decided to report an
operating result adjusted for all positive and negative items resulting from the guarantee,
legacy assets from the restructuring portfolio in the shipping loan business, restructuring
costs and IFRS measurement effects. The progress made by the Core Bank in terms of operating
profit is clearly reflected in this adjusted result before taxes with a net income figure of
€ 330 million, up from € 151 million in the previous year.

“What we need is an unobstructed view of the capability of our Core Bank to perform. This is
the only way in which we can explain to the EU Commission, investors and the market as a
whole that this Bank generates reasonable returns over the long term as a strong partner for
the region, ” said Constantin von Oesterreich.

Capital ratio of 11.3 percent according to Basel III fully loaded
The capital protection clause, a potential waiver of additional premiums by the guarantors
to secure a Common Equity Tier 1 (CET1) ratio of 10 percent, led to the reversal of guarantee
premiums of € 781 million recognised in the income statement in 2014. By contrast, substantial
guarantee expenses weighed the result down by € 861 million.

Wind-down of legacy assets – projected decline in total income – cost cuts
Total income of HSH Nordbank in 2014 came to € 909 (1, 496) million. The decline is in line
with the plan given that revamping and restructuring activities exerted strain on the Core
Bank and wind-down bank as expected. In addition, loan repayments, special items and the
appreciation of the USD together with the general decline in interest rates were a drag on
income. Accordingly, net interest income at group level recorded a substantial decline to
€ 586 (929) million.

This resulted mainly from the continued resolute wind-down of portfolios in the Restructuring
Unit by € 6 billion and negative special effects of € -154 million. By contrast, the operating
interest result rose slightly to € 588 (570) million. Net commission income rose to € 130
(104) million. Reversals of impairment losses in the Credit Investment Portfolio, sales of
securities in the context of liquidity management and the sale of individual equity holdings,
which are reflected in income from financial investments of € 171 (261) million, also made a
positive contribution to total income.

Net trading income of € 62 (193) million reflected factors including adjustments made as a
result of the Asset Quality Review (AQR), effects of the valuation of the Bank’s own liabilities
and from USD currency translation. The valuation of basis swaps and operating net trading
income had a positive impact.

As far as cost efficiency is concerned, HSH Nordbank continued the savings and organisational
changes it initiated in 2013. To illustrate, administrative expenses in 2014 decreased
to € -724 (-755) million. HSH Nordbank plans to reduce administrative expenses gradually
by nearly one-third down to € 500 million per annum by 2018. This will enable the Bank to
generate competitive returns on a sustained basis. To this end, it will implement measures
including further streamlining of its organisational structures, simplification of essential
processes and optimisation of the product portfolio as well as the IT infrastructure. As announced at the end of 2014, these steps will be accompanied by a further reduction in staff from the 2, 579 (2, 835; FTE) employees recorded at year-end through 2018.

Loan loss provisions and segment assets of the wind-down bank decreasing Net loan loss provisions before taking the guarantee into account recorded a substantial year-on-year decline to a charge of € -486 million, down from € -1.7 billion for 2013. New allocations were accounted for almost exclusively by troubled shipping loans in the legacy portfolio. This reflects the expectation of a no more than gradual recovery in the shipping sector. The drop of more than 70 percent was mainly attributable to the successful restructuring of legacy assets and the largely less risk-prone trend in the recent shipping book and in the other asset classes.

Net loan loss provisions of € -486 million stood opposed by the offsetting effect of the guarantee
amounting to € 1, 062 million. This effect consists of a gross offsetting amount of
€ 960 million less currency effects of € -339 (136) million and less the additional premium
of € -340 million plus € 781 million from the capital protection clause. All told, loan loss
provisions thus came to a positive figure of € 576 (-833) million.

In 2014, the wind-down bank resolutely reduced its legacy portfolio by € 6 billion to € 31
(37) billion and is thus on target despite the appreciation of the USD. The biggest reductions
were achieved in shipping and international real estate loans.
2015 marked by structural changes – profit expected

With the operating successes of the Core Bank, the continuing reduction in legacy assets
within the wind-down bank and the increasing cost cuts HSH Nordbank has created an
important basis for its future success. It is aiming for further structural changes in order to
improve the sustainability of its business model and the Group’s income situation.

These changes include promising restructuring of the guarantee in order to ease the pressure
on HSH Nordbank’s expenses over the coming years and to strengthen its capital base.
The task here will be to take into account the continuing reduction of risks and the previous
restructuring benefits as well as premium payments already made and the general level of
interest rates. These fundamental thoughts on the guarantee should also include clear ideas
on how to facilitate the reduction of legacy assets in future and how to implement portfolio
adjustments. Here, a particular focus will be on the shipping portfolio.

These efforts are
based not only on the most recent progress made and the earnings turnaround at HSH
Nordbank but also on the base premium payments of more than € 2.2 billion since 2009, the fact that total assets have been substantially reduced in recent years and the withdrawal from several areas of business.

The objective once the EU state aid proceedings have been completed is to establish a structurally
profitable HSH Nordbank in the market which is able to meet the current capital
formation requirements from its own resources.

In view of the encouraging start in 2015 across all business areas in terms of operating
profit, the further progress made on the cost side and the continuing systematic wind-down
of legacy assets HSH Nordbank expects to generate another profit in 2015. 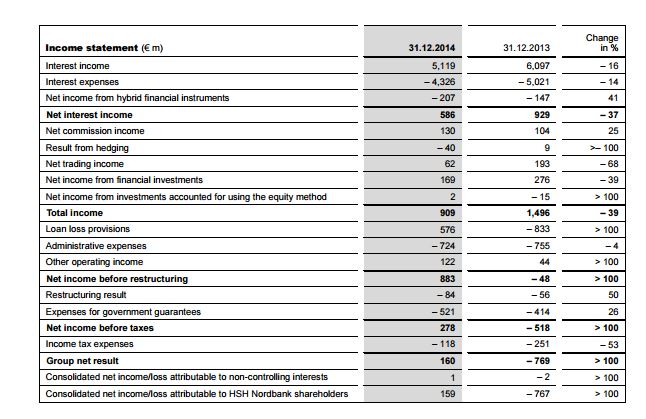