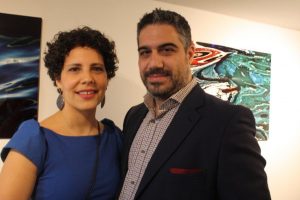 Kitsa Angelakos and husband Anargyros Skinitis with her prints Waves II and Subconscious Series 5 in background.

My passion is the sea and cargoships, and that is where I go for inspiration, says photographer Kitsa Angelakos. It was that unremitting inspiration that drew family, friends and admirers of her talent by the score to the private view of her first solo exhibition, which also launched West London’s Old Brompton Gallery, a convenient short walk from Earl’s Court tube station. 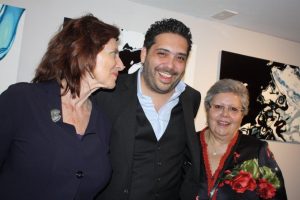 Kitsa’s highly original photography homes in on aspects of ships and the ocean, transforming mundane details into dramatic statements of the energy that binds human beings and society together: “fiery and feisty” as one of her series is entitled. An unexceptional section of a ship’s hull, for instance, is illuminated as intensely as an eruption of volcanic magma. A bold, close-up monochrome picture of anchor chains is made to display unflinching “unity and strength.” Kitsa’s eye for minutiae and contrast will make all of us scrutinise the play of ship’s bulk against the waves that much more carefully next time we are at the quayside or underway at sea.

Remarkably, her work is both figurative and abstract at the same time. We forget that this is photography – it could be the application of a lush acrylic paint, so vividly do the colours lay upon the surface. 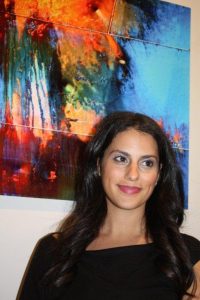 She assembled her images mainly during her work with a shipping company, wielding her camera in Greece and in other maritime ports of call.

At the computer, she uses technology to endow her frames with lasting impact – enhancing the colours, but refraining from using Photoshop or similar aids. The results are sets of ChromoLuxe metal prints in limited editions. 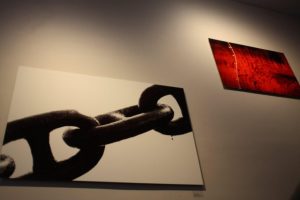 “The reason I love the sea is that it reflects, shines and twinkles on the surface, but deep down lie hidden mysteries, very much like the subconscious, ” says this thoughtful and considerate artist.

It was little wonder that the champagne-and-sushi private view, on a clear but cold evening, attracted a considerable crowd, including many people closely connected with the Greek shipping industry. Ms Angelakos was born in the UK, but she and her husband Anargyros Skinitis have family origins in Oinousses, home to some of the leading shipowning dynasties. 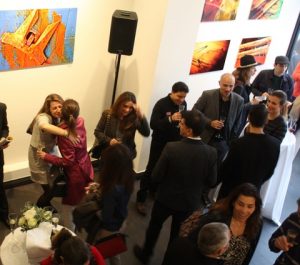 The curator of the show, Michaela Vergottis, has used to advantage the light and airy space of Old Brompton Gallery so that the works “have room to breathe.” It is a world away from the London traffic thundering by, or chugging at the engine in this intensely busy quarter until the traffic lights give them way. 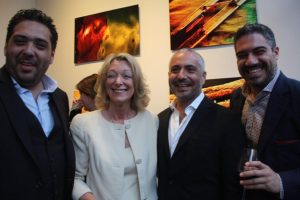 In the gallery, visitors were left with indelible memories of the strong images, summed up by one of Kitsa’s titles, Depth. She is now in the early stage of planning a new show.  She is not ready yet to talk much about it, but one thing is for certain – it will again be a reflection of her intense passion for the maritime world. “I love the sea. I fear it.  I respect it, ” she declares.