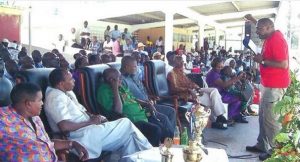 07 May 2015 – Trade union leader Nicholas Mbugua stirred up an outpouring of public support for Agility workers when he addressed a crowd of over 1, 000 and national and local government leaders and representatives at the May Day rally in Mombasa.

The general secretary of ITF affiliate the Kenya Long Distance Truck Drivers and Allied Workers Union, described the dangerous and violent tactics against workers and their choice of trade union being employed by managers of the logistics multinational’s Kenya branch.

The impact of his speech was immediate. The politicians – county governor Hassan Joho, county labour officer Jeremiah Katana, leading members of the national parliament and a representative from the president’s office – seemed shocked by what they heard about Agility and asked to see the evidence. Joho promised to convene an urgent meeting with the ITF and trade unions.  Teachers’ union KNUT vowed to support the Agility workers’ struggle, while the general secretary of the private security union promised to mobilise security guards to join the campaign.

ITF Africa regional secretary Joe Katende, who also addressed the rally, said: “May Day saw the greatest momentum in our campaign to win union recognition and protection for the Agility workers, with politicians being forced to take notice, public anger and union pledges of solidarity. This shows the huge potential for applying pressure on Agility and we will keep going.”

Agility drivers reported excessive working hours, inadequate rest breaks, unfair dismissals of union members and precarious short-term contracts, and went on strike in March to demand union recognition. The threat of police violence by a force armed to the teeth against peaceful drivers during the 12 day strike led to 5, 000 supporters along the highway at Voi protesting to the Agility CEO and compelled Katende to urge the police commander to withdraw his force. These actions encouraged the company to the negotiating table where a formula was signed to end the strike.
On 29 April, ITF and Unite members delivered a personal message about her mistreatment from Agility Kenya worker Ruth Matahi to shareholders of British American Tobacco, one of the company’s major customers – read more athttp://goo.gl/UsG8yB.
Support the Agility workers at http://goo.gl/A66uL1 and follow the news on Twitter at #agilityunionrightsnow