Eminent figures from across the shipping industry gathered in London’s Guildhall last night (May 6, 2015) to honour the achievements of the past year and the distinguished careers of winners at the 27th Seatrade Awards.

The prestigious evening, attended by more than 350 of the industry’s leading personalities, was hosted by international broadcaster and journalist, Todd Benjamin, in the presence of guest of honour, Alderman The Lord Mountevans, the current Chairman of both Maritime London and Maritime UK.

A broker at Clarksons, Lord Mountevans welcomed guests to Guildhall, which falls within Cheap, his ward within the City of London and said: “What an event, what an audience. Looking over the list of those attending I think that many of you and the firms that you represent deserve to be honoured.” 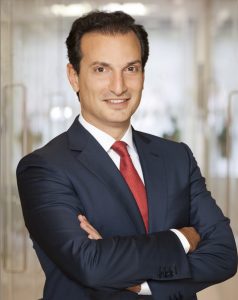 On receiving his award, Capt. Tsakos said: “The success of the company I have set up is not the accomplishment of one man, one family or even one generation. It is rather the collective outcome of hard work and ongoing sacrifices made by many generations, initiated by our forefathers who planted in us the seed of seamanship, and a devotion to the sea.”

IMO Secretary-General Koji Sekimizu added his comments on receiving his award, which he devoted to his wife, saying: “I would like to humbly receive this great honour for all people who support the IMO, including all the staff members of the secretariat and my family”.

The award for countering piracy drew strong support from the audience as the achievements of retired Colonel John Steed in returning seafarers held hostage in Somalia to their families were listed. Collecting the award on behalf of Colonel Steed, Richard Neylon, Partner at Holman Fenwick Willan commented: “Without John’s work and others’ work, many captured seafarers would never have found their way home. Today 26 seafarers remain hostage in Somalia, and with the help of the industry it is hoped they can make their way home, and we can close this dark chapter in maritime history.” 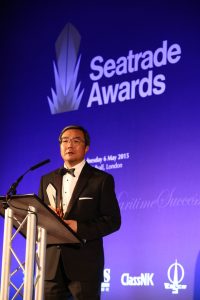 Koji Sekimizu, Secretary-General of the IMO

Lomar Shipping CEO, Achim Bohme, received the Seatrade Young Person in Shipping Award on behalf of winner George Logothetis, CEO of Libra Group and paid homage to Logothetis’ leadership during his time at Lomar which saw the fleet grow to 75-strong.

Rear Admiral Peter Brady, Director General of the Maritime Authority of Jamaica was honoured with the IMO-themed Award for World Maritime Day 2015 for Maritime education and training and said: ”I feel greatly honoured and humbled to be recognised on this global stage and receive this award, particularly in the presence of some of the world’s maritime leaders.”

Receiving the Global Performer Award, Wan Min – Executive Vice President,  Cosco, said: “We have been through some tough years indeed, but through restructuring and cost cutting and customer partnership building, we earned a strong year in 2014. As far as the wider shipping industry we are at the middle of the tunnel, with a few years to go until we see reasonable market improvements. In this sense we need to be together to protect ourselves and this industry.”

The awards, in time old tradition, remain a secret until the night and are unveiled to great fanfare and celebration.

The Shipping world’s best on stage!

Other Seatrade Awards 2015 winners are:

Winners: There were two winners in this category: DNV-GL and Drydocks World – Dubai

Investment in People sponsored by DNV-GL

Seatrade provides a range of global events, websites and publications that covers every aspect of the cruise and maritime industries, bringing together key people to encourage innovation and to produce powerful learning, networking and promotional platforms.

Operating in over 23 countries, UBM EMEA organizes many of the world’s largest, most important exhibitions, conferences, awards, directories, websites and publications in a wide variety of industries.

For full details about this event, visit: www.seatrade-awards.com

Singapore’s minister for transport to speak at LISW 2015