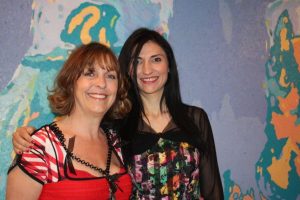 Opening London exhibition, Victoria Hislop tells of her devotion to the work of Greek artist Harikleia Papapostolou,  By James Brewer

Victoria Hislop, a leading novelist who delights in frequently setting her writings in the Greek landscape, has spoken of her admiration for the artist Harikleia Papapostolou, who has just made her London debut.

Intensely coloured, the compelling abstract oil paintings of Harikleia Papapostolou are on show at Belgravia Gallery, 23 Maddox Street, W1, until May 16 2015. The minute they entered the gallery, guests at the preview evening for the show were struck by the dynamism of the collection, which is entitled appropriately Breathing Colours. Harikleia, born in Stratoni in Halkidiki, came to London following critical acclaim for her previous exhibitions in Athens.

Formally opening the exhibition, Ms Hislop left the audience – which included personalities from the spheres of arts, culture, diplomacy, finance, investment, insurance and property – in no doubt of her admiration for Ms Papapostolou. 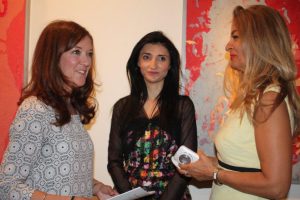 The author said that she did not consider herself an art collector, but as soon as she set eyes on a catalogue of Harikleia’s works, “I fell in love with them.  The pictures had so much texture and movement.”

Ms Hislop wasted no time in becoming the proud owner of one of the artist’s paintings. The novelist, some of whose work has been adapted for Greek television, counted herself a very fortunate person to have fallen for Greece many years ago. “I now rent a little flat in Athens. The only thing in my flat that is colourful is my painting similar to this, ” she said, as she stood before Harikleia’s canvas I Love You in the Belgravia exhibition. “The painting lights up the place. It has illuminated my life in a way that I do not think a $179m Picasso would do.”

Twenty-four hours previously, a painting by Picasso had sold at auction in New York for a record sum. Ms Hislop questioned whether the purchase would change the life of the person who had bought it, whereas in that context Harikleia’s paintings were incredible value. 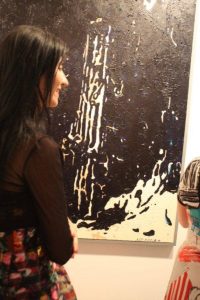 Harikleia Papapostolou with her canvas Athens in Love.

Ms Hislop said that generally she was not drawn to abstract art, but “I think paintings should just do something for you. There is no need to explain a work of art – we can just ‘feel’ it. That is how I want a work of art to be.”

The gallery, which makes intelligent and graceful use of the potential of its space, was an empathetic setting for Ms Papapostolou’s large canvases, which need room to ‘breathe’ so that each, bearing its own philosophical or emotional message, can be contemplated at leisure. 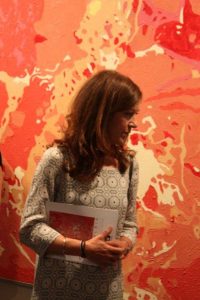 Victoria Hislop with the oil painting I Love You in background.

This is exactly what Harikleia wants, as she invites viewers to deliberate upon their own interpretations. Her use of colour is so original that often we think we are seeing a newly invented tint. There is a profusion of brightness, sometimes like rushing sunlit breakers at the seaside. One of the canvases is relatively dark, so much so that the inky hue of blue is almost black.  The piece is entitled Athens in Love, and it cannot be that the Greek capital is devoid of light – perhaps that refers to one of the moods of love. Even if this is the night sky, streaks of brightness are breaking through and could it be that from one corner cresting ocean waves are about to transform the scene to something of a more hopeful tenor?

Harikleia provided some clues when she told the assembled guests: “I want my colour to be adaptable.” Everything is in development and movement, she said, sharing the essence of her deeply-held philosophy. Every life is an individual thing which causes it to follow its own rhythm.

The artist expressed her thanks to London art consultant Diane Soames, who introduced her to the British art scene, and to the gallery owners Anna Hunter and Laura Walford, to Greek public relations consultant Vasso Sotiriou, to sponsor Hellas Gold, and to all who had supported her.

Ms Soames said that Harikleia “brings the warmth and light of Greece” to those who view her works.

Among the wide range of guests for the evening was the Cypriot High Commissioner, His Excellency Euripides Evriviades.