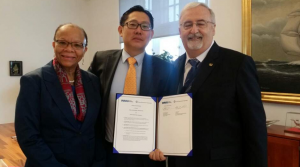 Yesterday in Malmö, Sweden, the Korean Shipowners’ Association (KSA) made a donation of US$50, 000 to the World Maritime University.

The donation was handed over by KSA chairman, Mr Youn-jae Lee, at a ceremony attended by Ms Cleopatra Doumibia-Henry (president designate of WMU) and Mr Neil Bellefontaine (current president). Both expressed their gratitude as well as their desire to maintain strong relations with KSA.

WMU moved into Malmö city earlier this month and KSA’s donation will be used to furbish the university’s cafeteria which has now been named “KSA Hall”
KSA maintains strong relationships with WMU as more than 80 Korean shipping professionals have graduated from the university. The alumni includes Mr Ki-tack Lim, president of the Busan Port Authority and a current candidate for the role of IMO secretary general, as well as Young-moo Kim who is the current secretary general of the Federation of Korean Maritime Industries.

KSA is committed to assisting with the development of the international maritime industry and to promoting Korea’s shipping industry globally. In particular, the association is focusing on enhancing the maritime sector in developing nations.

About
The Korean Shipowners’ Association is a nation-wide organization of owners and operators of vessels engaged in ocean transportation. It strives to promote fair and free activity in shipping and to contribute to the sustainable development of the Korean shipping industry.

The WMU was established in 1983 as a postgraduate maritime university founded by the International Maritime Organization (IMO), a specialized agency of the United Nations. With approximately 3, 000 graduates who are working in the global maritime sector, the WMU is operating a master’s degree program mainly targeting the maritime sector public administrations and employees of marine-related organizations around the world.