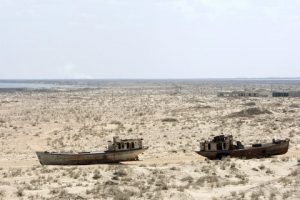 A view of rusted, abandoned ships in Muynak, Uzebkistan, a former port city whose population has declined precipitously with the rapid recession of the Aral Sea, shown in this April 2010 photo. UN Photo/Eskinder Debebe

12 June 2015 – Continuing his visit to Central Asia,  Secretary-General Ban Ki-moon today hailed Uzbekistan for the solid progress it achieved towards the United Nations Millennium Development Goals, in reducing poverty and maternal mortality, ensuring universal access to primary education, while recalling that there can be no peace and development without human rights.

“I also welcome Uzbekistan’s active participation in multilateral discussions at the United Nations and its contributions to addressing regional and global issues of concern, ” he said, noting its contributions to supporting stability and development in Afghanistan, as well in initiating the Central Asia Nuclear-Weapon-Free Zone Treaty.

Speaking to the press in the Uzbek capital Tashkent, while on his second official visit there as UN Secretary-General, Mr. Ban said that these achievements and commitments were the result of “steady and people-oriented socio-economic reforms initiated by President Islam Karimov.”

Mentioning the discussions he had with the head of State about a wide range of peace, development and human rights issues, the UN chief brought attention to the “tragedy” Uzbekistan is facing, along with other Central Asian countries, with the Aral Sea drying up.

“I will never forget my visit to Moynak and Nukus. What has happened to the Aral Sea has been a disaster long in the making, ” he stated, assuring that the United Nations is thinking about ways to scale up the international community’s support to address and mitigate the impact of that phenomenon.

More generally, regional cooperation and preventive diplomacy can play an important role to overcome the many “shared challenges” in Central Asia, from water and energy issues to drug trafficking to terrorism and violent extremism, he emphasized, reminding about the support of the UN Regional Centre for Preventive Diplomacy in the region.

Convinced that there is no development without human rights, the Secretary-General acknowledged the “good laws” adopted by Uzbekistan to uphold the rule of law.

“But laws on the books should be made real in the lives of people, ” he declared.

If the country has made important progress in eliminating child labour in the cotton sector, more must be done now to address “the mobilization of teachers, doctors and others in cotton harvesting, and prevent the maltreatment of prisoners.”

Welcoming the recent adoption by Uzbekistan of a National Action Plan on follow-up to the Universal Periodic Review by the United Nations Human Rights Council, the UN chief underlined that “implementation…is key” as it would help Uzbekistan’s compliance with its international human rights obligations, and bring wide-ranging benefits to its people.

“The United Nations – including the Office of the High Commissioner for Human Rights – stands ready to assist Uzbekistan in promoting and protecting fundamental freedoms and providing opportunities for public participation – including through independent media, democratic institutions, access to justice, a stronger voice for civil society, and safeguards that enable human rights defenders to do their vital work, ” he stated.

In that regard, he was encouraged, he said, that the recently signed UN Development Assistance Framework between the Government and the United Nations system defines “broad areas of cooperation to further good governance and human rights.”

Coins from ancient Thouria and the Syria Godess

LMA comments on the agreement facilitated by Turkey...