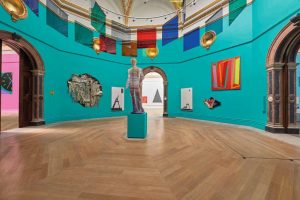 The Royal Academy’s Summer Exhibition for 2015 bursts on the scene as a disjointed blend of the bold and the bland.

From the off, the show veers from one end of the contemporary art scene to another – in fact, to many others.

If prone to dizziness, the intrepid visitor – who will be confronted by more than 1, 200 exhibits – must take care in navigating the staircase to the show. The approach has been covered in bright stripes of vinyl tapes by Turner Prize-nominated Jim Lambie to make up an installation to which he gives the title Zobop. Perhaps unintentionally the effect echoes pictures of the dazzle camouflage painted on British ships that sailed in merchant convoy during World War I (co-incidentally,  many such designs were created a century ago by women from the Royal Academy). Zobopis the latest variation of what is described as the signature work of the Glasgow-based artist. 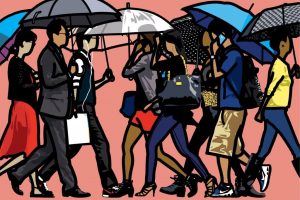 From this point, the visitor plunges into a relentlessly disjointed display of works, coordinated by British artist Michael Craig-Martin. He has masterminded the layout of the main galleries, against a background of what the Academy says is “an explosion of colour, ” in other words a repainting of gallery walls in garish hues. A cynic might say that this is overcompensation for the banality of some of the 1, 231 works, which have been chosen from 12, 000 submissions.

This is the world’s largest open submission exhibition, and has sections on painting, printmaking, photography, sculpture, architecture and film. The selection process is a mammoth task, and one which lends a veneer of democracy to this great annual event in which the output of Academicians rubs shoulders with non-Academicians, although in the opinion of some critics the sheer number of pieces is as ever, too ambitious. The splurge of entries ends up creating bewildering tensions between and within the rooms. True gems can get lost in the crush. 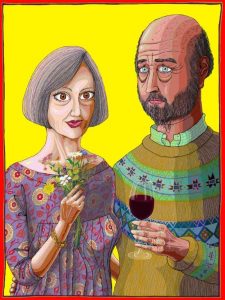 If the hanging of the show was daunting for the curator and his team, it certainly is for the viewer, apart from those possessed of extended rubber necks, for even with the galleries top-lit it is hard to see the detail of some of the works. Cramming so much in leaves some items too remote from the spectator. Individual pictures, especially those of an abstract nature, need what one might call room to breathe, rather than be treated like relay stops in a marathon race.

Several standout works make us forget the disconcerting challenge of taking in everything at one go. Grayson Perry has woven yet another of his satirical large tapestries, this one entitled Julie and Rob. A middle-class, middle-aged couple are in their natural domestic milieu, he – reminiscent of Clement Freud – with glass of red wine in hand, she with posy.

Deliberately positioned to be seen from a distance is Mississippi River Blues, a large carborundum relief in titanium white ink on paper painted with a mars black wash, by Richard Long. The composition resembles more the streaks of a waterfall than the might of the American waterway.

Yinka Shonibare, who grew up in the UK and Nigeria, maintains his trademark stance of thrusting undisguised colonialism and militarism before our eyes, with a series of five digital prints entitled Love in a Time of War.

Julian Opie, a former pupil of Michael Craig-Martin as is Damien Hirst and many other big names, shows a pop-art style screen print,  Walking in the Rain, Seoul, which as does all his work invite the viewers to add their own interpretations to the outline scene. 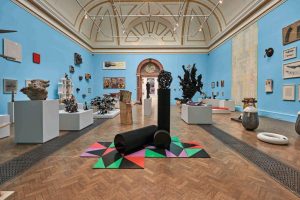 Sculpture stand-outs include Erebus Man on Fire (Version II by Tim Shaw.  This is a scary, almost dinosaur-like, piece in foam, polythene and steel that appears to be self-immolating and to be hideously charred – it is inspired by images of war in Iraq and in Ireland.

For perseverance, let us praise Tom Phillips whose work Humument has been in progress since 1966 and takes up an entire room. He has been wittily altering with collage and cut-outs one page after the other of a book published in 1892 bought second-hand. 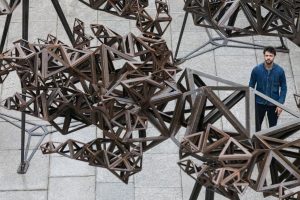 Conrad Shawcross with his sculpture The Dappled Light of the Sun, 2015. (c) Royal Academy of Arts, Benedict Johnson

Lovers of both visual art and opera should pause in front of two acrylic and silver leaf paintings by Linda Sutton, They are two of her paintings for her Opera Tarot project, all 78 of which were completed earlier in 2015. In La Fanciulla del West [an opera by Puccini], her Minnie is Renata Tebaldi. Linda recalls being at the opera in Bologna when the announcement came that the great lyric soprano had just died.

In the second painting,  La Forza del Destino, Linda’s Donna Leonora is based on imagination. “Although I have seen and heard some wonderful Leonora’s, there wasn’t a singer who visually inspired me, ” says Linda, “so, I made up my own!”

The youngest Academician, Conrad Shawcross, created a dominant installation for the much-photographed Royal Academy courtyard. EntitledThe Dappled Light of the Sun, it is a group of five weathering steel ‘clouds’ weighing five tonnes each, involving thousands of tetrahedrons. The sculptor says: “The Greeks considered the tetrahedron to represent the very essence of matter. In this huge work, I have taken this form as my ‘brick.’”

Love in a Time of War 1, 2015. Digital print with gold leaf on Somerset Velvet paper. By Yinka Shonibare. DACS 2015. Image copyright and courtesy
the artist.

The Summer Exhibition remains a wonderful tradition – it has been staged every year since 1769, and importantly helps finance the students of the RA Schools.

Royal Academy of Arts Summer Exhibition runs until August 16 2015, from 10am–6pm daily. Late night openings until 10pm are on Fridays.

Give Greece a chance Mr Tsipras!