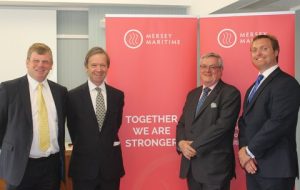 Mersey Maritime has hosted a visit by Maritime London as part of an initiative to develop ways in which the two bodies can encourage maritime organisations to work more closely together.

The day included a tour of Liverpool2, Peel Ports’ new £300 million deep water container terminal at the Port of Liverpool which is due to open at the end of 2015.

As part of the visit, a business lunch hosted by Mersey Maritime sponsor Brabners LLP, set out a number of themes which were discussed in further detail later in the evening at the Royal Liver Building on Liverpool’s iconic waterfront. This event was hosted by Tilney Bestinvest, a leading investment and financial planning entity.

The key topics of discussion involved the need for UK maritime organisations to work more closely together to compete effectively at an international level; the urgent need to address the skills gap and develop new career routes for apprentices especially in marine engineering; as well as promoting the excellent work carried out by the UK maritime industry and coastal clusters in ports such as Liverpool.

Other issues that came under discussion included the development of closer links with government and how both organisations would be working to utilise the forthcoming London International Shipping Week 2015 (LISW15)- which will be looking at the future of global shipping in the next ten years- to underline the importance of Britain as a maritime nation. Mersey Maritime will be holding an event during LISW15 and is looking to develop a similar Liverpool-based event in the intervening years.

Chris Shirling-Rooke, Mersey Maritime’s Acting CEO, said: “Mersey Maritime and Maritime London operate on behalf of our respective clusters in quite different ways but we share a set of common objectives. This visit by Maritime London is a positive move towards our two organisations working together more closely to facilitate links between different maritime sub-sectors and regional businesses in the UK. Mersey Maritime’s recent Memorandum of Understanding agreement with Liverpool John Moores University is also designed to do just that and we are excited by the huge benefits that developing important strategic relationships like these will bring to the UK maritime sector.”

Doug Barrow, Chief Executive of Maritime London, added: “I am continually impressed by the diversity and depth of maritime businesses within the UK. Creating the right environment to encourage greater collaboration between them must be a key priority for Mersey Maritime and Maritime London who have had reciprocal membership for a number of years.”