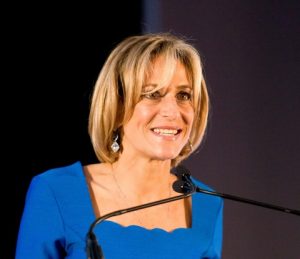 London International Shipping Week 2015 (LISW15) is delighted to announce that Emily Maitlis, Presenter of BBC Newsnight and the News Channel, is to moderate the official LISW15 flagship conference, taking place at the Grosvenor House Hotel on Thursday September 10.

The internationally-acclaimed journalist and broadcaster will bring her forthright and engaging style to the industry-leading conference. With a career spanning almost three decades, Emily began as a documentary maker in Cambodia and China, before developing her career as a journalist with the BBC, NBC Asia, Channel 4 News and Sky. She is a regular presenter of Newsnight.

Announcing Emily’s involvement, LISW Steering Group Chairman Jeremy Penn said: “We are thrilled to have Emily Maitlis moderating the flagship conference. Her challenging interviewing style, political knowledge and international perspective will enhance the LISW conference, which is set to be attended by maritime industry leaders from the UK and around the globe, as well as senior Government figures.”

Taking place from September 7 to 11 2015, LISW15 promises to be the must-attend event of the global maritime calendar with more than 100 industry functions and unique networking opportunities. Further information can be found on the dedicated event website: www.londoninternationalshippingweek.com or follow us on Twitter @LISW15.