Last break before the Tour’s outcome 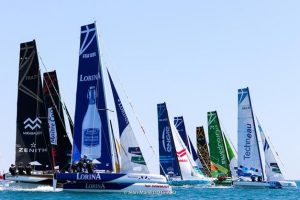 The boats are being delivered in Marseille today for Act 8, second last stage of the 2015 Tour de France à la Voile. After nearly three weeks of competition, the crew and the boats are feeling signs of fatigue, and this last day-off is a much welcome break to check, repair and rest before the final strech. But the 28 teams have all made good progress in three weeks, both on shore and on the water…

« I think we are the logistic champions now »,  says Beijaflore skipper Nicolas Bérenger. « We have made huge progress in dismantling and packing the boat and we can do everything in a bit more than an hour. We are very well organised. Each of us has a well defined job and we can save a lot of time working like that. I think it is key in the Tour. If you are not well organised on land, it’s harder to win on the water ». Beijaflore is part of the teams who have slowly worked their way up the leaderboard, going from 8th to 7th, and to 6th since yesterday.

Maître Coq had a nice day yesterday in Gruissan Stadium Racing, scoring three race podiums. And we can expect more good results for them in the next few days, as two of the crew are from Marseille, Christopher Pratt and Dimitri Deruelle. « We have improved a lot since the beginning of the Tour », says Deruelle. « Technically, we have a good boat speed downwind. But upwind, we are a little bit under the boat’s potential, so we have to work on optimising the settings and driving. The others are above us for many little reasons. At this stage of the Tour, fatigue is also a key factor, but it is the same for everyone and we can all make mistakes. But when everyone one is in top form, there are about five boats above the rest of the fleet and our objective is to reach the same level of performance ».

This is also Aurélien Ducroz’s ambition in the Tour. Double freeride ski world champion is surrounded by two multihull specialists Laurent Voiron and Olivier Backes, and their progress since the beginning of the Tour is impressive. They scored a 3rd in Roses stadium racing and a 2nd in Gruissan coastal race, going from 12th position overall just 5 days ago, to 7th yesterday. « Gruissan was the first coastal course where we had a chance to play with the wind. It’s very positive for us, because we didint make any mistake around the course and this is the first time for us. Until now we were always a little behind in terms of boat speed, so that means that now we have a better understanding of how the boat works and that’s great. We are going to do our best to keep going up the learning curve. But e have to be careful because everyone is makin good progress. We are all more and more confident so we tend to take more risks, including on the start line. We need to put extra efforts in looking after the boat, sails and gears, and working on the fatigue management so that we keep our head clear until the end of the event.. There are still two Acts to do ».

Corinthian young team Vannes Agglo – Golfe du Morbihan has almost always been in the top 5 since the beginning of the Tour, although their results are not the most consistent. One of the two skippers Mathieu Salomon explains why : « I think we were a bit unlucky at the beginning of the Tour. We’ve had a lot of troubles, like daggerboards breakage after running aground, the collision with PRB…. That’s why we struggled reaching the top 3, and I think we were frustrated about that. While now I think we are free from this. We really enjoy sailing together. We’ve worked a lot on being wiser, moderate our . And we are more consistent, and to me consistency is key in the Tour ».