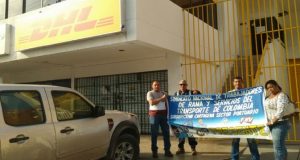 Members of Colombia’s SNTT (Sindicato Nacional de Trabajadores del Transporte) union took to the streets of five of the country’s cities yesterday to build union membership and worker confidence ahead of negotiations with the company tomorrow.

They leafleted DHL workers and workplaces in Barranquilla, Bogotá, Bucaramanga, Cartagena and Medellín to let them know that the union has submitted a letter to the company demanding that it allows workers to join a union in order to improve their working conditions. By submitting the letter of demand, DHL Express workers are granted special legal protection that prevents DHL Colombia from firing, transferring or otherwise treating them in a prejudicial manner.

The company responded to the mass leafleting by calling workplace meetings at which it is expected to try to persuade workers not to unionise. However, it won’t be able to prevent workers being present to argue the case for joining the SNTT.

SNTT’s president Esteban Barboza explained: “The company’s tough. Colleagues there tell us they’re calling meetings everywhere we leafleted. The word is that DHL is trying to make everyone sign a collective pact designed to try and undermine tomorrow’s negotiations and stop the workers exercising their right to freedom of association – something that is severely punishable under Colombian law.”

“We’re promoting new models of social dialogue, ” he continued. “We want to push and guarantee our rights. The letter of demand is part of a process of collective negotiation intended to secure guarantees for the welfare of all workers at DHL Colombia and improve the working environment. We have the right to freedom of association, and we’re making sure the company realises that. We are part of a global union family that brings together DHL workers everywhere in the struggle for what should be fundamental rights – to join a union, to be treated fairly. To be respected.”

He concluded: “We are deeply grateful for the support we’re receiving from our colleagues from Panama’s SIELAS union and the ITF Americas office.”

The ITF has contacted DHL’s global headquarters in Germany to advise it that its Colombian managers are potentially breaking national law and must rectify the situation.

Polish dockers protest in bid for ‘life with dignity’

IT system to transform SA ports into ‘smartPORTS’

The AMP manages to recover more than 2...