Polish dockers protest in bid for ‘life with dignity’ 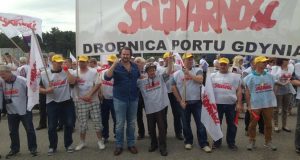 staged a protest last Tuesday (21 July) in their ongoing struggle for freedom of association and collective bargaining rights at the Port of Gdansk.

An ITF dockers’ team, including second vice chair of the section Torben Seebold, was on the ground in support of the 100 members of affiliated union Solidarnosc, who demonstrated outside the offices of employer DCT.

The rally was part of build up to strike action that may take place if management continues to ignore calls from workers for a collective bargaining agreement (CBA).

Seebold said: “The company is trying to make this dispute purely about money but that’s just not the case. What workers here want is a CBA that will put them in a position to negotiate on issues like permanent contracts, pay and working conditions.

“The chairman of the Polish national trade union Piotr Duda, who was on the picket line, got it exactly right when he said that workers are not asking for anything extraordinary. They want to live with dignity and have the opportunity to be fairly represented by the union of their choice on the issues that impact their day to day lives.”

He went on: “We will be standing by the workers here who are facing sustained opposition from DCT. We believe a number of union leaders have even been fired for their activities.”

In addition to support on the ground the ITF is also seeking conversations regarding the dispute with key stakeholders. These include Australian fund management firm Macquarie and clients in its infrastructure fund which owns DCT Gdansk and the European Bank of Reconstruction and Development which has made significant investment to fund port expansion plans.