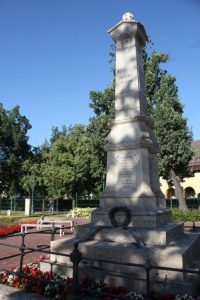 Monument to the galley slaves.

To residents of the Hungarian city of Debrecen, the great Dutch 17th century admiral Michiel de Ruyter is a hero. He is known as the Liberator.

Behind this landlocked central European city’s relationship with de Ruyter is a moving story, which culminates in the involvement of the late Pope John Paul II. The story is symbolised by what is known as the Memorial to the Galley Slaves, in a prominent religious site in Debrecen.

Michiel de Ruyter (1607-76) is best known in Western Europe for his role in the Anglo-Dutch Wars. He trounced the English and French including leading the bold Raid on the Medway. There was another side to this energetic naval commander:  he regularly freed Christian slaves by redeeming them at his own expense. 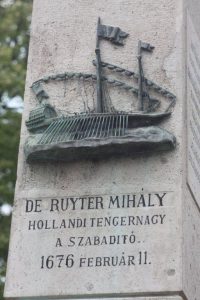 A tribute to Admiral de Ruyter.

Debrecen had become known as the ‘Calvinist Rome’ (after the French theologian John Calvin who broke from the Roman Catholic Church in 1550 and based himself in Geneva where he established a refugee centre). Conciliation efforts to heal the ecclesiastical breach failed, and the Catholics struck back with the Counter-Reformation. More than 40 Protestant ministers and teachers were arrested in Debrecen and transported to the Mediterranean to slave in the triremes – war and trading ships propelled by three banks of oars.

Inscribed on the Galley Slaves monument, which takes the form of a pillar in the Memorial Garden behind the Great Reformed Church of Debrecen, is the date February 11 1676. That is when the Dutch admiral and his fleet freed the surviving Protestant pastors – the number has been put at 26 men – from the ships which were in Naples at the time. The victims were given shelter in Switzerland, the Netherlands and Germany, before returning home. 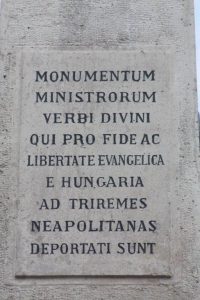 Commemoration of priests condemned to the galleys for their faith.

The column bears the Latin words: Monumentum ministrorum verbi divini qui pro fide ac libertate evangelica e Hungaria a triremes deportati sunt. It shows an open Bible with the words of Apostle Paul: “I have fought the good fight, I finished the race, I have kept the faith.”

Beneath a representation of the slave ship, the tribute has another inscription: “Michiel de Ruyter Dutch Admiral The Liberator.”

The monument in Kálvin tér (Calvin Square) was commissioned in 1895 by a benefactress in Debrecen in honour of the condemned group.

On visiting Debrecen in August 1991, Pope John Paul II after taking part in an ecumenical service laid a wreath at the monument as a gesture of reconciliation and of apology for the persecution carried out by his Church. There is now a bronze replica of that wreath that can be seen.

Speaking at the Calvinist Church, John Paul said: “I am well aware that this meeting would not have been possible in former times. A Pope visiting Hungary would not have come to Debrecen. The citizens of Debrecen would not have desired his presence.” 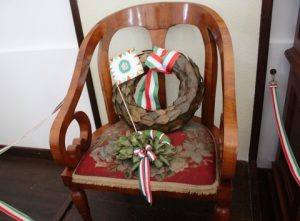 From this chair, Lajos Kossuth in 1849 declared Independence.

The religious pendulum did indeed swing violently. From 1536 the city had converted from Roman Catholicism to the ‘new’ religion, Calvinism, and a Reformed College which was to become a leading institution was founded two years later. For around 100 years, no Catholics were allowed into the city of Debrecen. Today there are almost as many Catholics in Debrecen as Calvinists.

Although Debrecen is a bastion of the Reformed Church, nearly two-thirds of Hungary’s 10.7m people are professed Catholics.

In the memorial garden is also the statue of István Bocskai (1557-1606) a Hungarian Calvinist nobleman, and Prince of Transylvania who led a revolt against the Habsburg Holy Roman Emperor’s effort to impose Roman Catholicism on the Kingdom of Hungary.

The Great Reformed church, holding in its western tower the 5-ton Rákóczi bell donated by György Rákóczi in 1637, is the unmistakeable symbol of Debrecen today. The present building was designed by Mihály Péchy, and built between 1805 and 1822. 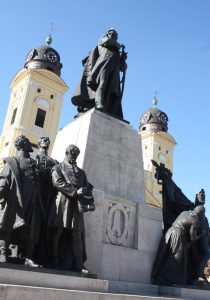 It has historical relevance to Hungary as a whole, as the scene of events upon which turned the fate of the nation. The government of the 1848-49 revolution took refuge in Debrecen after enemy forces drove it from Buda (the city that was to be united in the 1870s with Pest on the opposite bank of the Danube to be known as Budapest); and in the church, from an impressive chair venerated to this day, the rebel leader Lajos Kossuth on April 14 1849 pronounced the Habsburgs to be dethroned, and proclaimed the Declaration of Independence.

Today Debrecen is undisputedly the commercial, administrative, cultural and educational (hosting some 30, 000 students) capital of the east of Hungary.