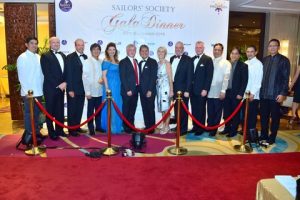 Sailors’ Society Ambassadors – Manila Chapter has raised US$37, 000 to aid seafarers in need at its first ever Gala Dinner.

Held at Dusit Thani Hotel in Makati City, Manila on 26 September, the event was organised by Sailors’ Society’s volunteer Ambassadors to fundraise and build awareness of the international maritime welfare charity’s work.

The night was a resounding success, with headline sponsorship from Wallem Group, SMART Communications, Seaspan and Marlow Navigation, and the 360 guests enjoying a champagne reception and four-course dinner. 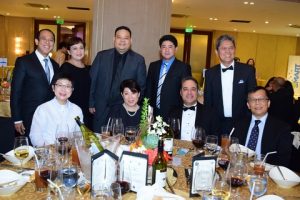 Sailors’ Society’s chief executive Stuart Rivers gave a well received introduction applauding Filipino mariners and highlighting the charity’s work in the Philippines. In addition to the Sailors’ Society port chaplains and family outreach worker providing daily support to seafaring communities and seafarers visiting the country’s ports, the charity has undertaken a rebuilding programme in partnership with Habitat for Humanity in the aftermath of Typhoon Haiyan.

Mr Rivers said: “We had incredible industry support for Sailors’ Society’s Emergency Typhoon Haiyan appeal which has enabled us to help rebuild communities devastated by the disaster, including rebuilding homes, community centres and school buildings; and the provision of welfare and enterprise grants. With almost one third of the world’s seafarers being Filipino we are keen to continue our focus in the region. Events such as these and the great efforts of our Ambassadors help to make all of this possible.”

Guests then danced the night away to renowned local band, Soul Republik, and enjoyed a lively auction which included a Princess Cruise star prize.

Sailors’ Society is an international charity that provides a personal lifeline for the world’s 1.5 million seafarers and their families, in port, at sea and at home. The charity offers practical help, emotional and spiritual support, financial assistance and family liaison. Our port chaplains visit thousands of ships every year, directly addressing the needs of seafarers – irrespective of a person’s belief or nationality – as well as maintaining vital links within the Ports that they operate.