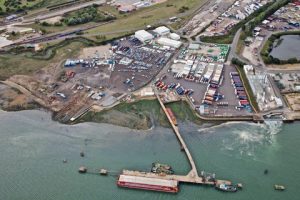 Brian and Rossalyn Chandler, who currently operate the slipways, will be joining the Burgess Marine team.

Burgess Marine will also be providing its ‘standard’ shipyard services to include project management, structural engineering in both steel and aluminium, mechanical engineering, marine grade electrical engineering and hydraulic repairs and renewals.

The site will be managed by Karl Kerry who also manages Burgess Marine Portchester’s 1000T syncrolift and yard at the top of Portsmouth Harbour.

Karl said: “The site is excellent and we already have good, long-standing relationships with all of the yard’s key customers – in fact we’ve at least four dockings already stemmed.

“We will be both investing and improving health and safety standards in Marchwood; we’ll also be changing the way that the site works.

“We’ll subcontract aspects of the works undertaken, for example the paint, but we will be doing the majority of the works in-house.

“What’s key for us is that we maximise the utilisation of the footprint and work in proper partnership with our customers to ensure the best, and most sensible, utilisation of both our footprints in Portchester and now Southampton.”

Some of the yard’s key customers are Red Funnel, Jenkins Marine, Blue Funnel, Williams Shipping and the Sandbanks Ferry.

The site will continue to be managed on a day-to-day basis by Brian Chandler.

Financial details of the deal were not disclosed.

With workshops and offices in Dover, Portsmouth, Portchester, Southampton, Poole, Avonmouth, Devonport and within STP Palma the business is ideally located not only to support the UK’s largest passenger ports, but also shipping in general throughout the busy English Channel and Superyacht’s based in Mallorca.

Burgess Marine is an ISO 9001:2008 British Standards Institute accredited company and holds ‘DNV Approved Supplier’ status; the company is also a full member of the Association of Diving Contractors.