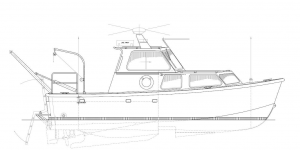 The three 28-foot Hydrographic Survey Launch Ships (HSLs) will be used on the coastal waters of the United States to conduct oceanographic surveys with hull-mounted and towed sonar units. A Cummins QSC8.3 engine capable of 510 HP with a ZF Marine 305-2 transmission will be used to power the boats. Outfitted to support traditional manned survey operations, the HSLs will offer additional flexibility to add unmanned autonomous capability. Two Willard Marine HSLs will be built for the 208-foot NOAA ship Thomas Jefferson, and an additional Willard Marine HSL will be built for the 231-foot NOAA ship Rainier,  reported by NOAA to be one of the most modern and productive hydrographic survey platforms of its type in the world.

Using advanced sonar technology, the crews of the Thomas Jefferson and Rainier conduct hydrographic surveys for the primary purpose of updating NOAA’s suite of nautical charts. Commercial shipping, commercial fishing and recreational vessels all rely on accurate NOAA nautical charts for safe navigation of coastal water in the United States.

“For 35 years, Willard Marine has built dependable, mission-proven vessels for American and international government agencies around the world, ” said Ulrich Gottschling, president of Willard Marine. “NOAA has been procuring fiberglass SOLAS rescue boats from Willard Marine since 2004, and we are proud to continue serving them with larger, aluminum survey ships to support their very important charting responsibilities, ” Gottschling added.

The customized HSLs for NOAA are derived from a former SeaArk Marine commercial boat design that Willard Marine acquired the licensing rights to last year. The HSLs are scheduled to be delivered to NOAA in Fall of 2016.

Willard Marine is a global leader in developing mission-proven boats for the U.S. military, Department of Homeland Security, many foreign governments, law enforcement agencies, search and rescue organizations and private companies. Willard Marine is the exclusive builder of commercial vessels originally designed by SeaArk Marine and Crystaliner. Based in California with facilities in Maryland and Virginia, Willard Marine is ISO 9001:2008 certified and the sole American manufacturer of SOLAS rescue boats.