Hungarian sculptor inspired by the life-force of womankind, and by art of ancient Greece… 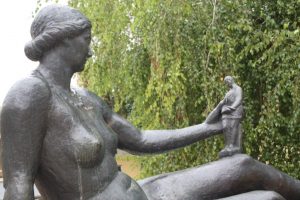 Hungarian sculptor inspired by the life-force of womankind, and by art of ancient Greece: Ferenc Medgyessy is honoured in an exceptional museum in Debrecen

Ferenc Medgyessy, one of the most admired personalities of 20th century European sculpture, readily acknowledged his debt to ancient Greek, Egyptian, Sumerian and Assyrian predecessors.

The works of the classical era greatly inspired the Hungarian sculptor who created many fine bronzes, reliefs and huge stone pieces based on the everyday life of his compatriots and the war sacrifice of soldiers. 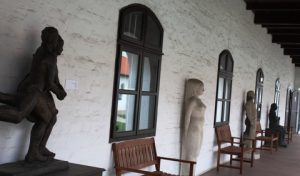 Some of the sculptor’s work displayed at the Medgyessy Memorial Museum.

Many of his works are intensely sympathetic to the female spirit. He wrote: “I have always regarded women as the wonderful gift of beautiful life.  Women are wonderful, capable of touching chords in men, the existence of which they have never even known.”

Medgyessy, whose work is greatly appreciated in his native Hungary after in earlier years achieving greater success abroad, deserves wider recognition, and his memorial museum a short walk from the centre of the city of Debrecen provides an appropriate starting point to assess his contribution.

Augmented by extensive porticos, the renovated house built in 1770 which contains a substantial collection of Medgyessy pieces was once the residence of a city official, and later military quarters. The Medgyessy Ferenc Memorial Museum reopened after improvements in June 2015 with a splendid permanent exhibition. 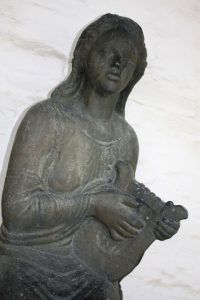 Medgyessy’s sensitivity to virtues of womankind and to ancient modes of dress.

Medgyessy was born in a house quite close to the museum in 1881 and died in 1958 in Budapest. Although he had no studio in Debrecen, he is considered the sculptor of the city. During the last 30 years of his life he constructed some 30 pieces of art for public places. He lived most of his life in Budapest but spent summers and holidays at Hortobágy, part of the Great Plain (Puszta) of Hungary.

The museum says that he was one of the most influential masters of the Hungarian plastic arts, who expressed the beauty of the Great Hungarian Plain with robust, realistic statues.

He returned to the solutions of Etruscan, Roman and Greek art in his technique, say the museum curators.

Dancers are characteristic subjects. His depictions of dance were influenced by Tanagra figurines, which were produced in mould-cast terracotta, from the fourth century BC, primarily in the central Greek town of Tanagra. That town was seemingly named after Tanagra, the Naiad Nymph of the well or fountain of the town.

Tanagra figures depict real women — and some men and boys — in everyday costume. Medgyessy was impressed by such sculptors who delighted in revealing the body under the folds of a himation, a garment worn over the left shoulder and under the right, over a chiton, a long tunic, and the movements of the drapery.  In his sculptures of this type, Medgyessy intends that “clothing does not really serve reality, but rather rhythm and music, ” as he wrote in his memoirs. 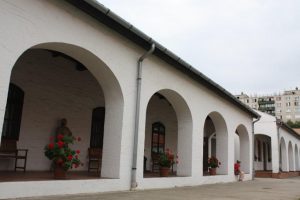 In addition to the mythological figures of archaic ages, his favourite subjects were working people of the district, and the concept of work itself: for example,  Scrubbing Woman, a bronze from 1913. His interest in the Greek legacy is further seen in the gypsum Harvesting Procession of 1939, reflecting enchanting dance and rhythm.

His family originated from Transylvania. In school he was fascinated by history and mythology, with names such as Phaeton (the son of Helios), Homer, Odysseus and Nausika resonating. The museum starts its displays with pencil drawings from his student years. The museum says: “He regarded the simplicity and sublimity of ancient eastern art as his aesthetic norm.” 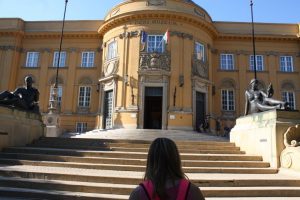 Two of Megyessy’s allegorical statues in front of Déri Museum.

His parents wanted him to be a doctor and he graduated in medicine, but was always drawing and travelled to Paris where he learnt painting and model building from 1905 to 1907.

Initially, he was influenced by Aristide Maillol (1861-1944), a French sculptor, painter, and printmaker who followed the traditions of classical Greek and Roman sculptors,  who chiefly fostered an art of serenity and stillness, of classical nobility and simplicity. This was a clear contrast with the more Romantic sculpture of Maillol’s contemporary Auguste Rodin. Maillol’s monumental statues of female nudes are distinguished by rigorous formal analysis. Some of Medgyessy’s stone sculptures are similarly massive and without decoration. 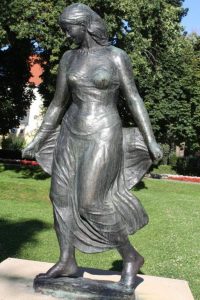 Medgyessy was influenced later by the German modernist Adolf von Hildebrand (1847-1921) who likewise insisted on the principles of ancient Greek sculpture. For Medgyessy the modelling of ancient Greek, Egyptian, Sumerian and Assyrian masters played an ever more important role. He visited Florence in 1908 to study Michelangelo’s works and Etruscan art and the discipline of stone carving. His works appeared at exhibitions from 1908 onwards. His first success was the relief Dancers.

He worked from 1911 until his death in the Budapest art colony of Százados Street. During World War I, he put his medical knowledge to use as an army surgeon.

Ágnes Czellár (shown wearing a swimsuit) was modelled in gypsum plaster in 1934.Gypsum plaster was the medium too for The Departing (which might recall friezes from the Acropolis) of 1931, and Turco-Hungarian battle scene, 1936.

In the interwar period, he was commissioned to produce several monumental statues, and modelled tombs which can still be seen on former battlefields. 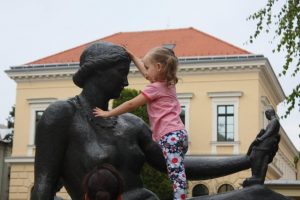 From 1930 to 1957, he produced 30 monumental works for public squares and buildings in Debrecen.  He won the Grand Prix at the Paris Expo in 1937 for his four allegorical nude figures representing art, archaeology, science, and ethnography. These remain in front of the grand edifice of the Déri Museum in the city, and emphasise the dignified balance of the architectural ensemble.

The statue of Hungary’s 19th century poet and national hero Sándor Petőfi for Debrecen followed in 1947, and that of the artist József Rippl-Rónai (1861-1927) in 1952. The 1956 statue of realist novelist Zsigmond Móricz was another erected in Debrecen after his death.

Medgyessy’s collected writings were published under the title About My Life and Art in 1960.