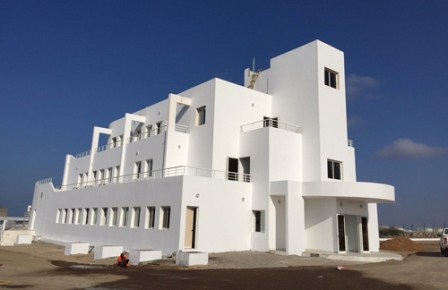 This impressive new centre will be a vital component in the provision of maritime security and other training in the Gulf of Aden and Western Indian Ocean area.

An international agreement that has been instrumental in repressing piracy and armed robbery against ships in the western Indian Ocean and the Gulf of Aden is set to significantly broaden its scope.

Signatories to the Djibouti Code of Conduct have agreed to work towards extending its remit to address other illicit maritime activity that threatens safety and security in the region, such as marine terrorism, environmental crimes, human trafficking and Illegal, unreported and unregulated fishing.

National focal points for the code, which was adopted under the auspices of the IMO in 2009, have adopted a resolution expressing concern at the increasing risks from transnational organized crimes at sea and other threats to maritime safety and security in the region. They agreed to encourage information sharing on all illicit activities at sea.

Training and other capacity-building activities implemented under the auspices of the Djibouti Code of Conduct have been credited with contributing to the reduction of piracy in the Western Indian Ocean and the Gulf of Aden, alongside the efforts of merchant ships to implement IMO guidance and best management practices, naval forces continuing to deter and disrupt pirate activities and States continuing to prosecute suspected pirates and increasing their maritime law-enforcement capabilities.

But the focal points recognized that piracy in the region has merely been suppressed and its root causes have yet to be addressed. They agreed that, nonetheless, there is now a window of opportunity for IMO Member States in the region to implement capacity-building programmes to prevent a resurgence of piracy and to address wider maritime security issues, as a basis for sustainable development of the maritime sector.

The focal points were meeting this week (11-12 November) in the newly-completed Djibouti Regional Training Centre, which was formally opened by Mr. Moussa Ahmed Hassan, Djibouti’s Minister of Equipment and Transport, on Thursday 12 November. The Djibouti Regional Training Centre will play a key role in regional capacity-building initiatives under the Code of Conduct.

IMO Secretary-General Koji Sekimizu, speaking by video message during the ceremony, encouraged the Government of Djibouti to be imaginative in its use of the new building and to be proactive in maximizing its potential, for the benefit of the whole region. The centre could be used as a venue for wider port, maritime, law-enforcement or indeed any other training, conferences and meetings, as well as being a centre of excellence for regional maritime security training, he said.

“This impressive new centre will be a vital component in the provision of maritime security and other training in the Gulf of Aden and Western Indian Ocean area and fully supports IMO’s 2015 World Maritime Day theme: “Maritime education and training”. It should be an asset to Djibouti and to the region for many years to come, ” Mr. Sekimizu said.

Construction of the Djibouti Regional Training Centre was funded by Japan, through the Djibouti Code Trust Fund, with equipment provided by Denmark and the Republic of Korea.

IMO continues to support Member States to implement the Djibouti Code of Conduct through its Integrated Technical Cooperation Programme (ITCP) and through the Djibouti Code Trust Fund. It also maintains a presence in the region, focussed on the code, with two staff members based in Nairobi, Kenya, whose primary role is training.

Djibouti Code of Conduct
The Code of Conduct concerning the Repression of Piracy and Armed Robbery against Ships in the Western Indian Ocean and the Gulf of Aden (the Djibouti Code of Conduct) provides a framework for capacity building in the Gulf of Aden and Western Indian Ocean to counter the threat of piracy. The Code was signed on 29 January 2009 by the representatives of: Djibouti, Ethiopia, Kenya, Madagascar, Maldives, Seychelles, Somalia, the United Republic of Tanzania and Yemen. Comoros, Egypt, Eritrea, Jordan, Mauritius, Mozambique, Oman, Saudi Arabia, South Africa, Sudan and the United Arab Emirates have since signed, bringing the total to 20 countries. Since its adoption, the Code has become the major focus for facilitating transnational communication, coordination and cooperation in its four thematic broad pillars: delivering national and regional training, enhancing national legislation, information sharing and building counter-piracy capacity.

More information on the Djibouti Code of Conduct.

A Gift from Paradise…