A Gift from Paradise… 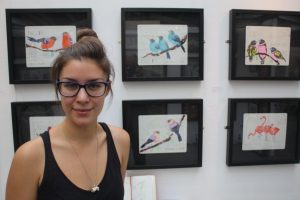 A Gift from Paradise: drawings by London artist Fran Giffard of brilliantly-plumed birds from Bermuda, Gibraltar and Réunion

London artist Fran Giffard spends as much time as she can on oceanic islands, witnessing the bird life – and with dazzling skill, drawing the creatures in all their fabulous, feathered glory.

Her quest for avian subjects has taken her in recent times to Bermuda, Gibraltar and Réunion.

Fran draws directly into the pages of a Moleskine-branded diary, which is based on the type of notebook that over 200 years or so has been used as a sketchpad by great artists including van Gogh and Picasso. The black-covered books, says Milan-listed Moleskine SpA, are “indispensable companions to the creative professions.”

In Fran’s hands, the pages become a mixture of the commonplace and quixotic, the everyday birds and the exotic. That is because she superimposes her illustrations in watercolour, gouache and graphite pencil on her diary notes and quotes. The bird images seem to sing, leap, fly, off the page.

Some of the diary entries are ornithological, some are notes about colours to be used, others are more ordinary:  “Aimee and Kevin came over for tea.” “Mum and Lu came over for supper – chicken, leak, mushroom pie!” “Hannah’s exhibition: six until when?” “Shopping list, ” “Recipe for stew…”

Fran Giffard’s meaningful mode of decorating diary pages is proving highly popular, and can be seen at the close of 2015 at three locations. The exhibition A Gift from Paradise is at Maker Gallery, Kemptown, Brighton, from November 2-26; a selection of drawings is at Curious Duke Gallery, 173 Whitecross Street, London EC1, until 28 November; and Birds of Gibraltar will be her first show at Sacarello’s café and restaurant, Irish Town, Gibraltar, from December 8-31 (Sacarello’s was set up in 1888 by Bartholomew Sacarello, grandson of ship’s captain Giovanni Battista Sacarello who docked at the Rock in 1817 when trading wool and hides. Since 1992 Sacarello’s has hosted art exhibitions by local and visiting artists).

Islands are ideal for catching the best of bird-life as refuelling and sometimes breeding places at mid-points on the great migrations. Fran happily makes the pilgrimages to the resting stops of avifauna to catch sight of and record on the page the fine plumage in play. She acclimatises to these spots as readily as the avifauna. 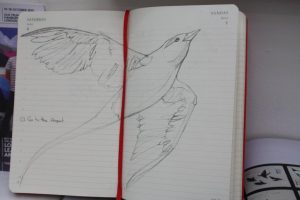 When we met Fran at The Other Art Fair in London in October,  she was especially proud of her illustration of a white-tailed tropic bird, of which Bermuda is believed to have the largest breeding population in the Atlantic. “I know that this is the kind of thing that most artists would say, but I really think that this is my best work to date, ” said Fran. “These birds are brilliant white, but when they reflect the Bermudian sea, their chests and bellies shine turquoise blue. This is what I tried to capture.”

She has a special fondness for Bermuda, where she gained her International Baccalaureate Diploma at Bermuda High School for Girls, going on to study in the UK for Foundation Fine Art and Design at the University for the Creative Arts, Maidstone, after which she gained her BA (Hons) in Fine Art: Drawing at Camberwell College of the University of the Arts London. It was while preparing her degree submission that she lighted upon the bird theme that has fascinated her ever since. As relaxation from her studies, she had been watching the film The Jungle Book, which prompted her to start drawing vultures, a bird which she then featured strongly in her finals exhibition.

Over the years she has gone from using graphite alone, to the striking colours that mirror her bird subjects, and a recent addition has been to include tree branches in the compositions.

From March to May 2015, she was artist-in-residence in at the Masterworks Museum of Bermuda Art in the Botanical Gardens at Paget, which led to her solo exhibition there of 42 pieces,  A Myriad of Birds .

Denizens of the Bermudian skies depicted in her diary drawings included the kiskadee, bluebird, peacock, cahow, white-tailed tropic bird, indigo bunting, Baltimore oriole, and cardinals. Business group Jardine Matheson – its holding company is incorporated in Bermuda – was so impressed that it sponsored the framing.

Bermuda is a boon for Fran because it hosts close to 400 species of birds, a huge number for a small country – it is at the crossroads of North Atlantic migration routes. Apart from bird-watching and sketching, Fran revelled in the natural attractions of the Caribbean and its brightly-coloured fish and in long walks across the island.

Soon afterwards, an offer of another thrilling journey came her way – to Réunion, the mountainous island in the Indian Ocean 680 km east of Madagascar. That trip was courtesy of the Dutch-based media company Endemol which asked her to draw the local birds for a short film. There are some 80 bird species in the island.

Most Europeans know little about Réunion, but people in France are the exception. As a French overseas département, Réunion has strategic importance and is a holiday destination. Its population is 850, 000 and the capital is Saint-Denis, on the northern coast.Sugar, rum, molasses and other foodstuffs are exported to France, via the artificial harbour of Le Port des Galets, 20 km from the capital.

Réunion lost much of its bird life with the arrival of European colonists in the 17th century, albeit that landing was a slow start to human endeavour because as far back as 1512 the Portuguese navigator Pedro de Mascarenhas had passed by and named the archipelago of Mauritius, Rodrigues and Réunion after himself, as the Mascarenes.  The French East India Company settled Réunion, calling it Île Bourbon and it prospered for nearly two and a half centuries before the economy succumbed to cheaper sugar production from Cuba and being by-passed by the Suez Canal shipping route.

According to the African Bird Club, a UK-registered conservation charity, “La Réunion’s volcanic origins with typical steep, rugged terrain have protected its rainforests that cover the high-lying areas.

“Since their permanent establishment in 1646, human colonists have brought about the loss of 75% of the native vegetation area (around 650 sq km remain) and 50% of the native vertebrate fauna including 55% of the birds. The avifauna of La Réunion is poor in species but has a high proportion of threatened and endemic taxa [species].”

Gibraltar is richer in bird species: 315 species of them, many being migratory. The vegetation on the Rock provides a temporary home for many species ahead of the transit over desert and sea.

Fran has amassed a fully-fledged CV in just a few years, listing a dozen solo shows and participation in more than 40 group shows. Her drawings, mainly 21 by 26 cm, and 14 by 18 cm are in private collections including those of Fidelity Investments,   Jardine Matheson,   Masterworks Museum of Art, Pensions Investment Corp and Moleskine. Her commissions have included drawing the penguins at London Zoo, and she counts as one of her greatest honours the acceptance by David Attenborough following one of his lectures, of a diary page depicting a ribbon-tailed astrapia, a bird-of-paradise with a tail of up to 1 m.