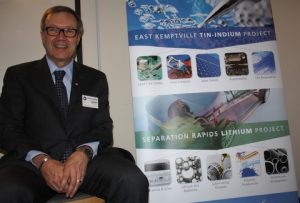 Lithium has become a critical element which will be thrust into the spotlight further as electric cars such as the Tesla are scheduled to accelerate into production soon.

This is all good news for the Canadian mineral development company Avalon Rare Metals Inc which specialises in niche market metals and minerals in demand in new technology. Avalon is currently focusing on its Separation Rapids Lithium Project in Ontario and its East Kemptville Tin-Indium Project in Nova Scotia. The company is rebranding itself under the title Avalon Advanced Materials, and – as a result of share price weakness which has reverberated throughout the commodities sector –delisting voluntarily from the New York Stock Exchange, which will leave it concentrating on its Toronto Stock Exchange listing.

In a presentation to investors in London, Avalon chief executive Don Bubar said that his company’s modest market capitalisation of US$15m “reflects how the market views us as a rare earths investment.” While assessing its lithium and tin production prospects over the past decade, Avalon has been better known for its interest in rare earths. Mr Bubar said that the investor market “has yet to recognise the other assets. I think that our lithium project and our tin project have yet to reflect on the market capitalisation.”

Separation Rapids is said to be the world’s largest undeveloped deposit – discovered in 1996 and taken over by Avalon the following year – of sought-after petalite, a lithium-producing ore.

It could eventually serve two growing but independent markets: high-purity minerals for glass ceramic applications, and petalite which is the basis for low-cost, high-purity chemicals for lithium ion batteries. Avalon says that its Separation Rapids deposit is well-positioned to serve future needs.

Much of the current excitement relates to electric vehicles. According to market research firm TrendForce, worldwide sales of such vehicles for the first three quarters of 2015 increased 31% year-on-year to 330, 000 units, with China accounting for the largest share, partly because of government support. China wants 5m electric vehicles on the road by 2020. Interest is also rising in Europe.

Costs for these batteries are expected to fall as technology advances. They will power homes and offices, and it has been said that solar power storage offers the greatest opportunity. 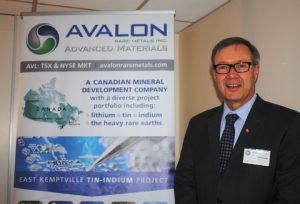 Tesla Motors is building its so-called Gigafactory in Nevada to produce Li-ion batteries for its future electric cars. With a planned production rate of 500, 000 cars per year in the latter half of this decade, Tesla says that it alone will require today’s entire worldwide production of lithium ion batteries. In April 2015 Tesla chief executive Elon Musk launched the Li-ion Powerwall battery for home energy storage.

As lithium chemicals are not traded on a commodities exchange, reported spot transactions tend to be used as a guide. Xinhua Finance Agency reported on transactions earlier this year inside China for battery grade lithium carbonate with price increases of between 9% and 11%. Minerals group FMC Corp in October 2015 increased prices for its lithium products by 15% as “market growth is outpacing current industry supply capabilities.” This was the second price hike of the year by FMC, which pioneered the rechargeable battery.

One of the ways improvements in energy density are being achieved is through ever higher purities of input raw materials including lithium chemicals.

Simon Moores, managing director of independent Benchmark Mineral Intelligence, and an expert in the logistics of the battery supply chain, told the Avalon investor presentation that the battery sector is going from a megawatt industry to a gigawatt industry – “and that is because of the Tesla Gigafactory.” The $5bn factory is ahead of schedule in Nevada and should be completed in 2016, but has yet to detail its sources of supply. 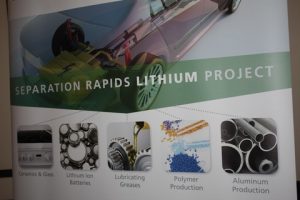 Some of lithium’s main uses.

Mr Moores said: “Utility companies, car companies and technology companies are all converging on batteries and want to put money into it one way or another. The problem they have not really addressed is the raw material. They are made from not easily accessible materials, most coming from Chile and Australia.” Mr Moores forecast a global shortfall of 175, 000 tonnes in 2015.

Mr Moores said that lithium was “the only mineral [price] in the world that is driven by a high-tech market. Every other raw material is driven by the industrial sector. That is the reason why prices have rocketed but all other commodities have fallen.”

Mr Moores said that production in Chile had been hit by political factors and flooding in Atacama in March 2015.  Australia had been “the saviour of the lithium industry in the last three years. They shipped concentrate to China, where it is converted to lithium chemicals.” Australia’s big supplier was now owned 50% by the Chinese and 49% by a US investor.

The switch from industrial to high-tech use was happening increasingly. “In the next five years, the lithium industry is going to need 100, 000 tonnes of new supply.”

From the late 1990s, electric and hybrid electric cars (most notably the Toyota Prius) were powered by rechargeable nickel-metal-hydride batteries, which were relatively large, heavy and costly. Lithium ion batteries offer higher energy density, do not need to be fully discharged before recharging, and have a relatively slow discharge rate when not in use. There are lots of new battery technologies, but they are said to be no threat to lithium in the short term.

This would have a significant impact on the raw materials fuelling the three megafactories, especially graphite, lithium and cobalt.

The lithium ion battery is seen as the primary energy storage solution for the foreseeable future, not only for electric vehicles, but also for home energy storage to enable greater use of renewable energy and reduce reliance on the grid.

Initiating its coverage of the lithium market, Stormcrow Capital said: “As in many other mining sectors, it is likely to be junior miners that serve as the source of new production for the industry.”

At Separation Rapids, initial leach tests to produce lithium chemicals for battery applications produced encouraging results, said Avalon, which is spending $750, 000 on a pilot plant programme. Mr Bubar said that the big challenge for the first half of 2016 was to define the market and how much the pre-production development would cost.

Avalon points to other developments illustrating that some consumers are taking action to secure long term supplies from emerging producers. In November 2015, Nemaska Lithium signed a memorandum of understanding with Johnson Matthey Battery Materials of Quebec allowing for an up-front payment by the latter of $12m for future services and products, including provisions for a long term supply agreement for lithium hydroxide and carbonate.

Avalon is meanwhile weighing up how to re-open cost-effectively its tin mine and make it a new source of ‘conflict-free’ tin.

The UK-based International Tin Research Institute, of which Avalon recently became a member, has referred in one of its market commentaries to the need for new mines to be developed to replace steadily declining production capacity from pits in Peru, Indonesia and China. This, said the Institute, would create opportunities for emerging tin producers.

Little new production capacity has come on stream over the past 10 years. While London Metal Exchange tin prices have fallen to the $15, 000 per tonne level in 2015 from more than $20, 000 in 2014, LME tin inventories remain low, prompting some industry analysts to forecast that prices will rise in the absence of significant new supply.

Some supplies from Central Africa have been designated as ‘conflict minerals’ which preclude their use by consumers in the US and European Union under legislation aimed at curbing sales used to finance armed conflict.

The property is near the former East Kemptville mine, which produced tin from 1985 to 1992, when it closed because of low international tin prices. “Significant resources were left unmined, ” said Mr Bubar. Tin is internationally priced in US dollars, so at current exchange rates future Avalon production costed in Canadian dollars would enjoy a healthy margin.

A report on company prospects by equity researchers at RB Milestone Group said: “Few investors realise that tin is no longer just about tin cans and bronze, but is now a critical metal in consumer electronics due to its use in solders as an alternative to lead, which has been legislated out of use due to its toxicity.” Tin is used in lead-free solders for electronic circuit boards – this application is thought to account for just over 50% of global demand.

At present there is not a single tin producer in North America.

Mr Bubar says that his company is scheduled to complete a preliminary economic analysis in early 2016 which will allow for 2015 drilling data to be compiled and integrated into an updated resource estimate.

One possibility being considered by a technical team at the company is to initiate production in a relatively small way, milling 1, 200 tonnes per day from the low-grade ore stockpiles on the site, ahead of potentially restarting mining operations on a larger scale. A small initial capital investment in a mill and gravity circuit to produce tin concentrate would be enough to produce cash flow. That could happen in 2017 or 2018.

The longer-term scenario – which would need an ambitious $200m to $300m capital spend – is for a conventional open-pit operation of 10, 000 tonnes per day, a similar level to the original mine.

Avalon set December 7 2015 to file notification with the US Securities and Exchange Commission to withdraw its New York Stock Exchange listing, which would be effective 10 days later.

It said that its voluntary move was the result of its recent low share price being deemed not to be in compliance with the listing standards of the exchange.

Avalon’s common shares will continue to be listed on the Toronto Stock Exchange, and it has applied to have its common shares qualified to trade in the US on the OTCQX® Best Market.

Institutional shareholders have in total a stake of 20% in Avalon.

Avalon is one of the few junior companies to publish a sustainability report and has just released its 2015 edition. The company says it considers social responsibility and environmental stewardship to be corporate cornerstones.