The midday activation of four course areas signaled the start of the Sailing World Cup Melbourne for the seventh time. With the last of the humidity and smog blown off by yesterday afternoon’s strong sou’westerly change, the major international city by the bay put on a cool day with ample wind for Olympic class competitors to kick off their points chase. 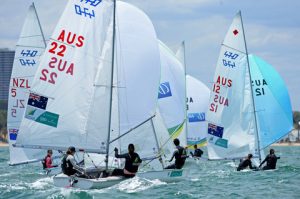 Racing between today, Wednesday December 9, and Saturday, will be divided into two sessions starting daily at 12 noon and 14:30 local time. Big crowds are expected on the weekend when St Kilda turns into a massive stage for the sailing unfolding along the foreshore, in particular Sunday’s Medal Races.

Olympic and Paralympic classes opened Melbourne’s World Cup program in fickle southerly winds and easy-going seas. By the afternoon session 22 knot sou’easters and white capped waves had whipped up Port Phillip and turned the outing into a challenging physical contest at the upper wind limit for some classes.

When the invited and youth classes begin their competition tomorrow, 900 plus competitors racing across the full nine courses mean the World Cup is in full swing along the bay’s eastern shoreline. Breezes are forecast to be south to south-easterly 10-15 knots ahead of another strong sou’wester on Friday with predictions of 20-30 knots in the afternoon.

Optimist vs Olympic Challenge
Tomorrow morning there’s a unique opportunity for those on holidays or out exercising on the waterfront when five Australian Olympic gold medallists and a number of Sailing World Cup ambassadors are pitted against a fleet of junior Optimist sailors off the front of the Royal Melbourne Yacht Squadron at 09:30.

A mini race course will be set up and afterwards the Optimist sailors and future champions on the path to the sport’s highest level later, and schools students involved with the Discover Sailing program will have the opportunity to meet and chat with the sporting greats. The public is welcome to attend.

Results
470
The Conway twins of Alex and Patrick made their finals plans known from the outset, banking two bullets from two races to be leading the early pointscore from two more Australian pairs, Angus Galloway and Josh Dawson (AUS) and Chris Charlwood and Seamus Mullholand-Patterson (AUS), after two races.

“That was an ideal start to the regatta, ” Patrick acknowledged. “We had a comfortable speed and a good handle on the breeze.” 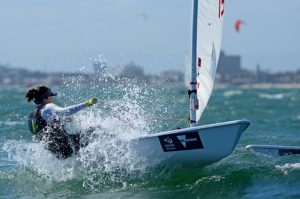 49er
Two bullets for David Gilmour and crewman, Rhys Mara, was plenty to give them an early break on the quality 49er fleet before the wind strengthened to the point some crews struggled to stay upright.

On their Sailing World Cup day one Mara said, “It’s really good to be back in Australia and sailing in some really good conditions. The first two races were in moderate conditions, shifty as the wind tried to go to a sea breeze. Then it picked up significantly and we got some true Melbourne conditions. There were a few capsizes by the other boys, thankfully not us. It’s good to get back to the front of the fleet and back to our winning ways after a slightly disappointing worlds.”

On the leap of faith to the new St Kilda venue there is good feedback from competitors. “We’re rigging right on the beach and launching into calm waters, and it’s good to enjoy some of St Kilda and some of typical Melbourne.”

Race two was “super windy with steep waves” according to winner Mitch Kennedy (AUS). “It was Luke and I neck and neck the whole race. We popped clear and had our own race at the front. Colin Cheng (SIN) caught up a bit and then it was all on around the top mark.”

Laser Radial
Consistency is the name of the game and Tatiana Drozdovskaya (BLR) and Ashley Stoddart (AUS) showed the way in the Laser Radial.

Drozdovskaya won the first race by just four seconds from Stoddart then found herself on the back foot for the second race start. “We were to-ing and froing, one of us would pass the other and then vice versa. It was good fun, ” said Stoddart who has just returned from the Laser Radial World Championships in Oman where the conditions were significantly lighter than today. 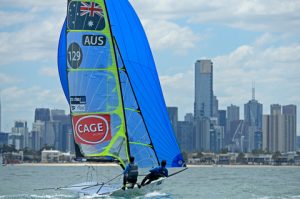 RS:X Women
Joanna Sterling (AUS) was on fire in the fresh Port Phillip breeze, winning three from three races. Hot on her tail is Lauren Mackenzie (NZL), another young sailor using the Sailing World Cup Melbourne to help prepare for the ISAF Youth Sailing World Championships in Malaysia later this month.  Mackenzie finished second in all three races and Singapore’s Audrey Yong completed two of the races to be third equal overall with Lara O’Brien (AUS).

As the breeze kicked up to 18 and then 20 plus knots, Jourdren had tight racing with New Zealand’s Richard Dodson, Andrew May and Chris Sharp in race one and then had to keep World Championship silver medallists, Australia’s Colin Harrison, Jonathan Harris and Russell Boaden, at bay in race two.

At the end of today just one point separates Harrison from the third place Kiwis.

49erFX
The small fleet of women in the 49erFX Olympic class demonstrated early they are going to push each other hard for the entire series. New Zealanders Ellie Copeland and Erica Dawson at the helm finished a point off Tess Lloyd and Caitlin Elks after three races.

“It was a reasonable first day, we felt like our speed was really good, ” Copeland said. “We are trying to learn a lot while we are here. It would be awesome to win, I love it here, it’s closer to the city and I really like the sailing waters, I feel like there are good courses.”

Finn
Croatian Finn sailor Josip Olujic and Oli Tweddell (AUS) went head to head to finish first and second on equal points. Tweddell is a World Cup ambassador and though the fleet is small he anticipates good racing over the five day series.

“The Croatian is a really good sailor and I reckon in light winds Nick [Kennedy] will stick it to us. It will be tight racing and definitely different to sailing at the Finn Worlds when we had 75 boats in the fleet. This will be short, sharp and intense racing.”

More than 900 sailors of all ages will be on Port Phillip tomorrow as the invited classes commence competition but it’s business as usual for the Olympic guys who start at 12:00 local time.

SPNL Bribery, Corruption and Valuations in the shipping industry