SPNL Bribery, Corruption and Valuations in the shipping industry

A full house at Mazars during the presentations. Photo credit: Lucy Navas

The Shipping Professional Network London (SPNL) hosted another great networking event recently courtesy of MAZARS, who kindly acted as both host and sponsor. Members of SPNL were once again afforded access to leading industry speakers, akin to those usually only found at high-level conferences.

The MAZARS event combined the expertise of 4 speakers, all of whom offered fascinating insights into anti-bribery, corruption and valuations within the shipping sector.

Jake Storey of TRACE, a leading anti-bribery compliance solutions company, started off the evening’s discussion by stating that corruption posed a large-scale ‘cultural’ problem. He said “I hear a lot of ‘everyone is doing it’ or that ‘shipping is different’ as a justification. I have a different view on this. Shipping has unique challenges in relation to corruption, but we are not different.”

What can we do to start making a change? The biggest thing is to ‘push back’, getting the right tone set from the top and then filtering this down through the supply chain to ensure a clear understanding and a consistent approach.

Storey continued: “Things are changing, the environment has changed, the focus of the industry has changed. The risks for big companies are great. 90% of prosecutions in the US focus on third party risks; if you are a customer of BP then you are the third party and potentially, the weak link. The right to audit is being put in contracts; the industry is going to have to move with this. You have got to comply with legislation and engage your business with this type of strategy. Changes are happening rapidly and shipping is taking it up slowly. If you are an organisation who implements a zero tolerance policy this could be an effective differentiator in today’s market, a competitive advantage for the business.” 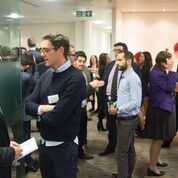 The International Standards Organisation has recognised the need to help organisations prevent bribery and promote an ethical business culture. Howard Shaw, Mazars’ Head of Anti-Corruption Services, is the Chair of the British Standards Institution (BSI) anti-bribery committee. In this role he is the UK Head of Delegation to the International Standards Organisation (ISO), where an International Standard in bribery risk management is now being drafted. Shaw introduced the anti-bribery management systems standard ISO 37001, giving SPNL members an exclusive preview. “There was a need to create some solid guidance around how to show an organisation is trying to stop corruption and bribery, from this, the anti-bribery standard was developed, ” said Shaw. He continued, “This is the only standard in the world that advises companies and organisations on how to manage corruption risk. ISO 37001 will help an organization comply with international anti-bribery good practice and legal requirements.”

The ISO has been in development for 2 years and is an anti-bribery management system based on normal risk management practices. It follows the PDCA cycle: Plan, Do, Check and Act and can be applied to any organisation from a sole trader to a multinational. It is a standalone management system addressing bribery and not corruption, which as Shaw pointed out, “is the symptom of corruption and the focus of most legislation around the world.” Shaw went on to explain that assuming the draft International Standard is adopted by ISO members, ISO 37001 Anti-Bribery Management System should be released in H2 of 2016.

The evening’s programme then turned to the subject of valuations, with James Gilbey, Mazars LLP, adeptly introducing the topic and how it applies to the shipping industry. Gilbey started off by explaining to the audience the meaning of valuations. He stated, “Valuation is an opinion not a fact. It is not objective, we are coloured by our own influences and experiences, therefore we all have different opinions on what might be an appropriate valuation. You never get a precise estimate of value when valuing a business; you only get this when the transaction happens.”

The International Valuation Standards Committee outlines standards that are not mandatory, but are generally accepted by accountants and valuation experts as a good guidance. There are a number of valuation approaches but all are intended to answer the same question: ‘What cash will the asset generate, or save, for the owner who is holding it?’ Gilbey continued by outlining the various approaches to decisively calculate a value. Most importantly Gilbey informed the audience that using more than one methodology and standing back and ‘sense checking’ is vital when valuating.

Toby Yeabsley from VesselsValue completed the discussion by introducing the specifics of vessel valuations. VesselsValue is the online ship search, valuation and mapping service for Bulkers, Containerships, LNG, LPG and Tankers. The company currently has 750 users including: banks, lawyers and brokers.

Yeabsley told SPNL members: “We use a five factor model to value vessels. We value 35, 000 vessels every night, 365 days of the year. We value 30 – 40 features per vessel. For example, the tanks it has if it’s a tanker, or if it’s a container, the number of refrigerator plugs etc…”  88% of the time VesselsValue is successful in valuating -10%/+10% of actual sale value using comparable sales, supply and demand at the current time and analysing influences such as age, size, and type of vessels on an individual basis.

Concluding the evening SPNL chairman, Claudio Chiste, presented Sean Moloney, Shipping Innovation, with a glass plaque engraved with Tower Bridge to celebrate the ‘open for business’ message of this year’s London International Shipping Week. The driving force behind LISW becoming a reality was the vision of Sean Moloney alongside Llewellyn Bankes-Hughes, the co-owners of Shipping Innovation. Two years on, LISW 2015 was bigger and better than ever, holding 120 events across the week.

Moloney used the occasion to exclusively introduce the report produced evaluating the week. He said: “LISW is unique because it is the whole industry working together, it’s about promoting London and the UK maritime cluster, showcasing what it can do internationally and propelling world trade.” He added, “The cooperation between industry and government that has been achieved is the valuable blueprint behind its accelerated success to the global must attend event that it has now become. We have produced a LISW15 post-event report detailing the successes of the week and tonight is the perfect platform to launch this. LISW is all about the importance of cooperation within our sector and bringing the industry to the next generation, characteristics that are shared and embodied by SPNL. It is also no coincidence that SPNL has consecutively organised one of the most well-received networking events of LISW.”