The story of the elusive bird 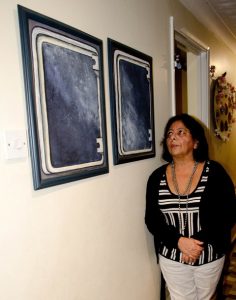 Sheila Malhotra with her diptych Milky Way seen through a Porthole

The story of the elusive bird,  By Sheila Malhotra*

Amidst the Himalayan Mountains, dotted with little hamlets connected to one another by narrow goat trails, lay the once sleepy village of Thanedar-Kotgarh, home of my legendary grandfather, the late Shri Satyanand Stokes aka Samuel Evans Stokes.

There, at the height of 6, 300 ft above sea level stood this amazing village – snow-bound in winter, quiet through most part of the year, but buzzing with activity during the three summer months, when truckloads of apples were transported down the winding narrow Indo-Tibet Road to various parts of India for sale.

Known as the home of apples, it was here that my grandfather brought apple saplings from America at the beginning of the 20thcentury, thus pioneering the cultivation of apples in India.

So quiet were these mountains that when a farmer’s wife sang a song in the local Pahari language while working in the fields, her musical notes would flow down the valleys and echo back at her, often followed by a response from afar, a sound unknown to her.

My anecdote starts more than sixty years ago. 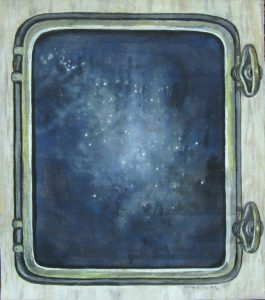 Milkyway Viewed through a Porthole. Gouache on handmade paper. By Sheila Malhotra.

We trudged along a narrow and rugged road interrupted only by little rivulets flowing down the snow-capped, undulating mountainous slopes.

For me, Uncle Lal was like a Pandora ’s Box of mountain region vocabulary or jargon. Open the box and out would flow every breath of the Himalayan Mountains, its fragrance, its flora and fauna, its butterflies, the sounds of its birds, and above all my uncle’s hilarious jokes – everything funny to a little girl! He was virtually my Hero!

What particularly caught my fancy during the walk was the sound of a certain bird which said ‘co cooo cuk’, ‘aa aaa tut’ or something like it. My uncle told me its name in the Pahari tongue, but that didn’t make much sense to me, as I had no idea what it looked like.

Thereafter I happened to live in various parts of the Indian Subcontinent, stretching from the Himalayan Mountains with their pine forests, to the sun-baked plains of India, from the peace and solitude of the hills to the noisy, chaotic, thickly-populated cities with high-rises kissing the sky at their 35th or 40thfloors, but I never heard that sound again. And nor did it bother me! I had totally forgotten about it. 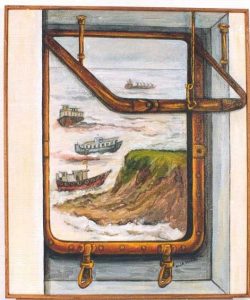 Many years later we moved to London on my husband’s posting there. One day, in the early hours of the morning, I was woken up by a familiar sound that I had heard before somewhere. That struck a note of familiarity and the old memories came back! Was it the same elusive bird that I had heard as a little girl in the Himalayan Mountains? Strange! Quite amazing! How exciting! To hear it after all those years!

It was a cold November morning. In spite of the cold I rushed out to the garden to see the bird. But, I could only hear it. I couldn’t see it! Alas it wasn’t there! So much for the bird! I wonder why?

At first I would hear the sound occasionally. Then having moved house closer to Epping Forest I heard it all the time – during my morning walks, daytime, evenings, from rooftops, among trees and even from the top of TV aerials. But where was it?

The way I look at things, this bird is far too smart and it is difficult to guess which among the many birds in the sky it is! If one hears its monotonous cooing,  and looks up to where the sound came from, it stops speaking.

One day as I walked my little grandson Krish to his crèche, I heard a very feeble sound. It was the same voice I had heard so long ago when my uncle had taken me on that rugged road. At that time it sounded very loud

And it was the same I had been hearing in London so often and right now it was coming from the tree under which we stood.

“Krish” I said, “Here it is! I can hear it. We have got to find this bird today! Come along, help me look for it.” Both of us peered through the thick foliage. The sound was there but not the bird.

With every leaf that moved, Krish would shout, “Come Dadi [paternal grandmother]. Come! Here it is!” He didn’t know what exactly I was looking for, but his curiosity, his intention was so sincere that I couldn’t help but pick him up in my arms and kiss him. 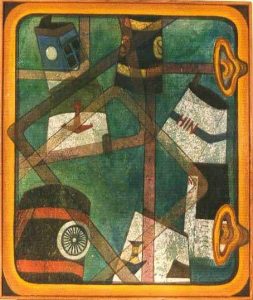 By now we had become the closest of friends looking for our one common target.

At last, hidden among leaves and brown branches, I caught a glimpse of the bird. She sat there on her nest of brown twigs hiding from all human sight and from predators, perhaps laying eggs or else protecting them.

I called out: “Krish, here she is. I can see her” He jumped onto my lap again and peering through the dense growth he finally detected her in her nest. He clapped his hands, danced with joy and jumped around in delight.

While mine was an overwhelming joy – a life-long yearning fulfilled! I had discovered what I was looking for – my grandson’s joy so spontaneous, so overpowering, so intense that it was difficult for me to discern whose joy was more – his or mine!

But we now shared a secret. He would teasingly, with his little nose squeezed up, secretively say to me: “Neeest!” His brother Shaurya wanted to know the secret, but we kept it from him for a long time, until one day he followed us to the nest and discovered it for himself.

Dolphins at Play. Oil on canvas. Copy. By Sheila Malhotra.

The bird however, turned out to be the Eurasian collared dove: Well, there it was!

Much ado about nothing! Or I dare say, so much for so little!

Be that as it may, the joy that this common bird gave to both of us was infinite, the only difference being that mine started in the heart of the Himalayas (mountainous terrain, sparsely populated and the abode of a simple people), whereas Krish found his in the financial capital of the world, epitome of cultural richness, a city whose population is forever bursting at its seams.

However, that moment, that discovery will always be a jewel in the crown for us — bonding us, and will be cherished by us forever.

ODE TO A BIRD
It perched atop my roof today,
Almost as if to say,
I always watched you seeking me,
Looking here and there,
I played hide and seek with you,
You knew not I was where!
But truthfully,
I’d been at hand,
Always very near!

*Sheila Malhotra is an established London-based artist whose works include the series entitled Through the Porthole.

One night in Calais…

Time to register for Oceanology International 2016