Top Posts
The BDI drops down to 1,540; Wets maintain...
John Faraclas of All About Shipping contributes to...
Irene Rosberg addresses the 22nd Parliamentary Intelligence-Security Forum
Ready to hit the water? So are these...
Coach Fall/Winter 2022: A Collection That Feels Like...
Badgley Mischka Fall/Winter 2022: Wearable Sculpture in Ultra-Chic...
Power, philosophy and heroism of central bankers, and...
New superyacht goes up in flames
American Club Circular no.23/22 – EU Sanctions –...
Hot Port News from GAC
Ulla Johnson Fall/Winter 2022: Organic Forms and Nature’s...
American Club Member Alert (August 12, 2022) re...
Witherbys leads the way in digitisation as 5,000...
Home Associations OMFIF Bulletin – February 2016: China in transition 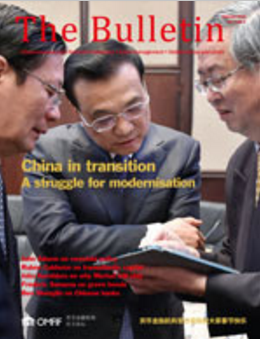 The February 2016 Bulletin focuses on China and the effects of a series of challenging transitions. The world’s second-largest economy is moving towards a more market-driven approach and opening its capital markets at a time of uncertainty over renminbi policy. This coincides with the Communist party’s struggle to maintain its hold over an increasingly wealthy, internationally mobile and politically astute population.

The Bulletin include reviews of OMFIF gatherings in the past month. They include Economists Meetings on 25 January and 4 February in Vienna and Frankfurt; a 28 January lecture by Central Bank of Iceland Governor Már Guðmundsson; and meetings with Lord Andrew Adonis, head of the National Infrastructure Commission, on 12 January, Prof. Maurice Obstfeld, chief economist at the International Monetary Fund, and Prof. Jeffry Frieden, professor of government at Harvard University, on 20 January, Takehiko Nakao, Asian Development Bank president, on 26 January, and Jaime Caruana, Bank of International Settlements general manager, on 4 February.