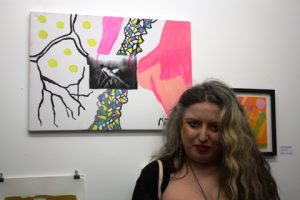 Knock on the red-painted door of an intimate art gallery in a byway of trendy Shoreditch, and inside you will find a display by around 60 mainly British artists. With their small-scale works they present vibrant examples of contemporary endeavour and experimentation.

This is the ART/Converters! 2016 fund-raising show for the independent gallery Studio 1.1, in which everything by “past and future” artists has been donated for sale at £200, “an astonishing price, ” as the organisers have it.

Behind each of the exhibits in this loose collection demonstrating the inexhaustible variety of tracks being pursued in this London scene is an individual story of commitment and determination. 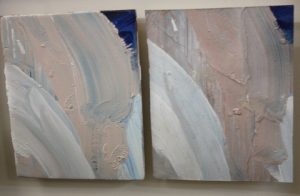 One of the most striking contributions in this miscellany is from Polish-born Marta Boros, the latest in her series of Self Portraits.

It is executed in her typically bold style in which emotions are explored and proudly exposed. A collage and acrylic configuration, at the centre is a black and white photo of the artist reclining nude one summer day on a beach by the River Wisla, which runs through Warsaw and at 1, 000 km is Poland’s longest river.

This is very much a personal expression. That photo taken some years ago recalls carefree days, and a couple of streaks of paint leach over it as other pre-occupations of life enter her consciousness. Flamboyant in her style, Marta deals confidently with this juxtaposition of frames of reference.

Marta says that her inspiration is fired when listening in her studio to recordings of the rock band Pulp. She has long admired this group, which originated in Sheffield, and its co-founder, the singer-songwriter-broadcaster Jarvis Cocker. Indeed the eight bright yellow dots – floating amid other timeless symbolism – which she has painted in her composition at Studio 1.1 “remind me of Pulp.”

In this feminist and animated picture, the elements seem disparate but in the end the composition is satisfying. It suggests a woman determined to secure her birthright and make sense of the baffling kaleidoscopic currents in the world.

Marta Boros is meanwhile working on larger canvases, and her biographical theme will continue in the poetry she is preparing in Polish for an anthology of Polish Poets in London.

Illustrating skill at making an impact through free brush strokes is Sarah Knill-Jones of London and Paris, who contributed Procris and Cephalus XI (fragment) in oil to the show.

Although at first appearance this canvas seems non-representational, but it pays homage to The Death of Procris, by Piero di Cosimo (c 1486–1510). That work, oil on poplar and dating from around 1495, is in the National Gallery, London.

Sarah’s venture here combines “myth, mistaken identity and interpretation.” The myth is of the jealous Procris, slain while she spies on him by her husband who mistakes her for a wild animal. The Piero work hangs in the National Gallery opposite the more famous Venus and Mars by Botticelli, which attracts more attention.

Using this as her starting point, “I plunge into a narrative of mistaken identities and also of the process of painting, its manufacture and removal from spectator experience, obsessively painting and repainting the subject until I felt it could go no further, ” she explains on her website.

She says that she attempted to challenge the idea of value attached to the original and not to a copy. “During the obsessive painting process, I partially destroyed a number of my paintings from the series, only to resuscitate them as fragments. The fragments hold more resonance as diptychs, where … the image itself is finally dissolved, allowing mark and colour to become the work’s raison d’être. The viewer perceives the work as abstract, each copy becoming an icon to the original, not knowing that they owe their existence to the portrayal of an ancient myth.”

Her artist’s statement concludes: “The activity of painting is a loaded one which continually references its past in order to exist in the present, and therefore continue into the future, emphasizing the elasticity of time and our profound connections to that which has gone before.”

Sarah’s works have included a series about women in expatriation and migration. Among other projects, Sarah has an involvement with the artist community of Azerbaijan and has had a solo exhibition at Baku Museum of Modern Art and another at MiM Centre of Contemporary Art in that city.  Her website states that she is a member of the Artists’ Union of Azerbaijan.

Helsinki-born Ritva Raitsalo turns out silver gelatine photographic prints that are surrealist montages refashioning hypermodern aspects of the cityscape of London. One such photo-collage at Studio 1.1 was part of this ongoing work focusing on urban intensity – faces in a faceless city. A woman peers apprehensively like an Alice in Wonderland into what must seem to her to be a Lilliputian canyon of skyscrapers.

Ritva says: “Buildings are like gigantic sculptures, which can be manipulated and restructured according to my own plan… Collage pieces are like magician’s cards.”

On the opposite wall, John & Sissy Hughes celebrate some of London’s unsung heroes: the cleaning crew, engineers and other workers who keep the London Tube as tidy and s efficient as they can, against a background of the hectic activity of the metropolis. The labourers face us purposefully which makes us unsure how happy they are in their public duties…

Studio 1.1, run by Keran James and Michael Keenan, is an artist-led, not-for-profit gallery started in 2003 a short walk from Shoreditch High Street. They say: “Our main aim has always been to provide a supportive environment for artists to take risks.”

The gallery is “primarily artist-responsive rather than just artist-run.” It plans mentoring surgeries for artists and members’ evenings that will be networking opportunities for visual artists of all kinds, writers and other creators.