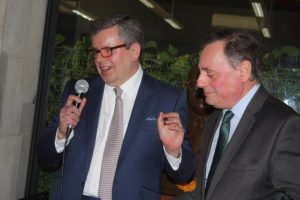 A magnificent display of 102 photographic images showing how some individual citizens, in the words of the title,  ImagineGreece,  has been unveiled at the London School of Economics. Most of the talented amateur photographers are residents of Thessaloniki. Their contribution is part of a tribute to the LSE’s Hellenic Observatory research institute on its 20th anniversary.

Bestowing high-level recognition on the celebration, the exhibition was officially opened by H E Konstantinos Bikas, Ambassador of Greece to the UK, on March 9. Located in the LSE Old Building atrium, it is open to the public until March 18 2016. 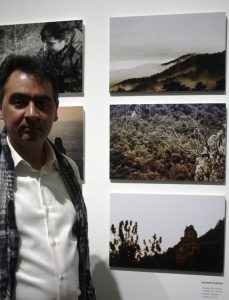 Prof Kevin Featherstone, director of the Hellenic Observatory, added to the welcoming words of the ambassador his praise for participants in the show. The milestone event is organised by the Observatory in conjunction with Thessaloniki-based Photoglobe Seminars (which had challenged its followers each to submit three shots showing an aspect of modern Greece) and with LSE Arts.

That 34 photographers managed to distil the essence of their vision of Greece into three frames was praised as a remarkable achievement.

The Ambassador led congratulations to the Hellenic Observatory on achieving its great stature in the academic sphere, and to the photographers for their excellent work.

Mr Bikas used his speech to dismiss “fallacies” about Greece’s recent financial history and said that lessons had not been learned about the transfer of capital and loans from the economic centre of the European Union to the periphery. He went on to say that in the bail-out it was not that money had been given by individual countries to Greece, but that the EU for bigger reasons had decided to support the financial stability of the Eurozone.  He said that in the last few years Greece had lost 28% of gross domestic product – the equivalent of what Germany had lost during World War One. 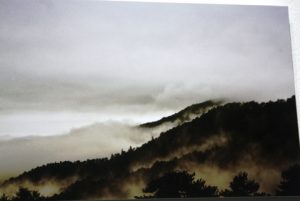 The Ambassador said that Greece was suffering dearly from the refugee crisis which was caused by factors beyond its control, but that the role of the country “would make us proud in the years to come.”

Greece was hoping that decisions from the most recent European summit were focusing on the right issues. These were to find a solution that would stop the flow of refugees and crack down on people making a trade out of the suffering of others. A political solution should share the burden among all European countries. He said: “It is not a time for dividing Europe but of sharing and facing our responsibilities of being humane, ” which were also in the interests of expediency.

Prof Featherstone said that the exhibition was a rich panorama of life in contemporary Greece. Its connotations, emotions and interpretations of the nation reflected “the different realities of Greece today.” 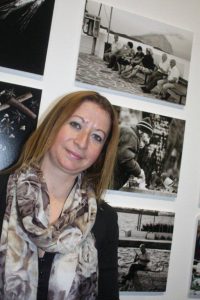 Summarising the mission of the Observatory, Prof Featherstone said that it set out to enhance understanding of modern Greece, and engage with colleagues in Greece on academic research. Among signs of success, since 2002 the Observatory had welcomed 12, 000 guests to events. In 2015, Observatory publications were downloaded 26, 239 times.

Most photographic submissions for the show were in impressively-deployed colour, while a few showed the power of monochrome. The 34 photographers had attended courses run by Photoglobe Seminars – a Thessaloniki-based company which organises photography workshops and seminars. Four of the camera aces, residents of the northern Greek city, were present for the opening ceremony.

Ioannis Felonis was representing Photoglobe Seminars for the evening. His three photos were a misty miscellany of landscapes of Mount Olympus, the highest mountain in Greece, abode of the 12 gods of mythology. Ioannis, an electrical engineer by profession in Thessaloniki, works as a facility manager. 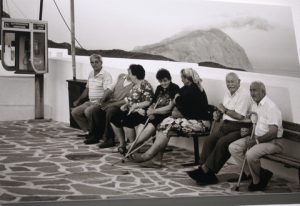 Scene on the island of Anafi. By Theodora Symeonoglou.

Theodora Symeonoglou, who graduated in marketing and communications at Westminster University, following a BA in business administration at Thessaloniki, presented one photo of local people chatting on the Cycladic island of Anafi, and the two taken in Thessaloniki.

Sasa Moisidou, who is an architect, took pictures of three young people, each with a symbol of traditional Greece painted on their face. One was adorned with an olive, one with a column from a great temple, and one with the waves of the sea. Underneath her pictures ran the motto: “I am Greece. We are Greece. Every person is Greece. Paint Greece with your own colours.”

Sasa Moisidou: “Paint Greece with your own colours.”

Thessaloniki-based fashion designer Meni Sapranidou had three photos all distinguished with the special deep blue colour that instantly evokes Greece. She showed Lake Plastira (an artificial lake near the city of Karditsa) and Lake Prespes (freshwater lakes on the Greek border with Albania and FYROM).

Tasos Triantafyllou was one of those who could not make it to London, but his Portraits of Women, Greece 2015, drew appreciation.

Among the quotations used by the photographers to accompany their work were the words of the late poet and Nobel laureate Odysseas Elytis: “If you take Greece apart you will be left with an olive tree, a vineyard and a boat, which means that with these items you can rebuild Greece.” That pithy summary was chosen by photographer Eytyxia Petridou.

Hellenic Observatory is part of the European Institute at the LSE and is internationally recognised as a premier research centres on contemporary Greece and Cyprus. Following a campaign in the 1990s to establish a chair on Greece that was neither concerned with the ancient nor classical past, nor the arts and humanities, the Observatory was established in 1996. This was put into effect through the creation of the Eleftherios Venizelos Chair of Contemporary Greek Studies based on a generous endowment from public and private Greek donors. It was the first such chair in the social sciences to be created outside Greece and the endowment allows the chair to be held on a permanent basis.

Twenty years later the Hellenic Observatory is one of the largest departmental research units in the LSE. Says the Observatory team: “We can be very proud of this achievement and can justifiably claim to be the premier international location for the study, teaching and research of contemporary Greek politics, economy and society.”

As Prof Featherstone has the position of the Venizelos Chair, he is also the director of the Hellenic Observatory. On its website, the Observatory says: “The role of both the Chair and the Observatory is to promote the multidisciplinary study of contemporary Greek politics, economy and society. Our coverage has developed to cover both Greece and Cyprus, and to relate these to both the rest of the European Union and to southeast Europe.“

This includes developing and supporting academic and policy-related research; organisation of conferences, seminars and workshops; academic exchange through visiting fellowships and internships; and teaching at graduate level through LSE’s European Institute.

During the private view evening.

The Ambassador, who joined the Greek diplomatic service in 1983, was educated at Athens University and took graduate studies in private shipping law and international law at Hamburg University. His postings have included Vancouver, Algeria, Baghdad and Boston, and from 2005-2009 he was director of the private office of the president of the Hellenic Republic Karolos Papoulias. He is a former general director of the Greek National Intelligence Service. 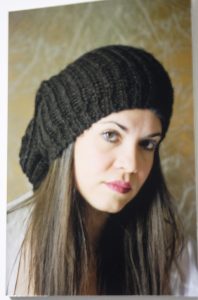 One of three Portraits of Women, Greece 2015. By Tasos Triantafyllou.

Entry is free to the exhibition Imagine Greece, which runs at the LSE Atrium Gallery, Old Building, Houghton Street, until March 18 2016, from Monday to Friday between 10 am and 8pm. The Observatory site is http://lse.ac.uk/ho and Photoglobe Seminars is at www.seminars.photoglobe.gr

Thank you very much