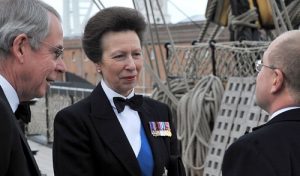 Her Royal Highness The Princess Royal attending INEC 2010 with (left) IMarEST President in 2010, Rear Admiral Nigel Guild CB FREng and Cdre John Newell MBE RN, who was then Chairman of the INEC Technical Advisory Committee; both are Patrons of INEC 2016.

Her Royal Highness The Princess Royal will be visiting the 13th International Naval Engineering Conference and Exhibition (INEC 2016). INEC 2016 is being held Tuesday 26 – Thursday 28 April 2016 at The Passenger Shed at Brunel’s Old Station, Bristol, UK and is an Institute of Marine Engineering, Science and Technology (IMarEST) Learned Society event.

“We are delighted that Her Royal Highness, an Honorary Fellow of our Institute, will be attending INEC 2016, ” says the Institute’s Chief Executive, David Loosley.  “As Admiral Chief Commandant for Women in the Royal Navy we believe she will find the conference, with its theme ‘Engineering the Triple A Navy: Active, Adaptive, Affordable’ of particular interest.”

In the words of Cdr Matt Bolton RN, Chairman of the INEC 2016 Technical Advisory Committee: “INEC provides a unique and uncompromising forum for professional engineers and technologists from across the world’s navies, defence industries and academic establishments to share the very latest thinking and developments in warship and submarine design and operation.”

The biennial INEC, which HRH The Princess Royal attended in 2010, has a long and proud history. Over 300 delegates from nearly 20 countries are expected, including representation from navies at all levels; manufacturers and suppliers; and academics.

In addition to keynote addresses and over 75 peer-reviewed technical papers, more than 20 of which are eligible for the Sir Donald Gosling Award, designed to recognise young authors aged 35 and below, INEC has a small focussed exhibition, and delegates will be taking advantage of the excellent networking opportunities both within the exhibition hall, and within the social programme, which includes a reception aboard Brunel’s ss Great Britain.

The Principal Sponsor of INEC 2016 is the Babcock International Group together with Major Sponsors: BMT Defence Services, Rolls-Royce, QinetiQ, and GE’s Marine Solutions.

Further information on all aspects of INEC 2016 is at www.inec.org.uk and from inec@figsevents.co.uk.  Online registration is now open; and all non-IMarEST member participants will be made complimentary IMarEST Affiliate Members for one calendar year, giving instant access to Institute services.

Seatrade Cruise Global ’16: RINA will acquire a stake in IB