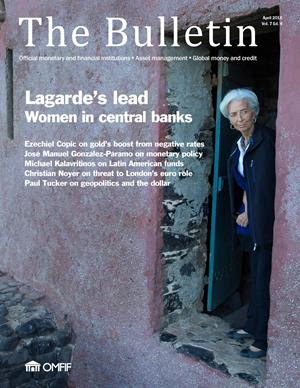 OMFIF’s annual index of the role of women in central banking, published in the April Bulletin, shows only a slight improvement, and even some slippage, compared with the findings of our last survey a year ago. The index moved up slightly to 2.19 (out of a maximum of 10) at the end of 2015, from 2.07 the year before. With Wendy Craigg of the Central Bank of the Bahamas and Zeti Akhtar Aziz of Bank Negara Malaysia stepping down this year, 2016 may turn out to be a year of setbacks for female prominence in central banking.

One eminent female in official finance,  Christine Lagarde, has been reselected for a second term as managing director of the International Monetary Fund. She presides over the spring meetings of the IMF and World Bank in Washington in mid-April. Lagarde writes in the Bulletin that increased female participation in the labour force, as well as in central banks, helps efficiency and performance.

This month’s edition puts negative interest rates and the gradual emergence of a multicurrency reserve system under the spotlight. José Manuel González-Páramo, a former European Central Bank board member, now at the Spanish bank BBVA, outlines his view that monetary policy is running out of steam. Barnabás Virág describes how the Central Bank of Hungary has turned towards targeted monetary measures to help foster economic expansion. Ben Robinson examines latest IMF data on reserve asset diversification. Ezechiel Copic from the World Gold Council says gold has prospered from negative rates as central banks around the world step up purchases.

The Monthly Review includes accounts of a roundtable hosted by Kristin Forbes, member of the Bank of England Monetary Policy Committee; addresses by Wolfgang Schäuble, the German finance minister,  Christian Noyer, former governor of the Banque de France, and Otmar Issing, former member of the European Central Bank executive board; and a debate to mark the launch of the new edition of Europe’s Deadlock, by David Marsh, OMFIF managing director.

We present the findings of March’s Advisory Board poll on the UK’s EU membership, underlining concerns that a British exit would promote the EU’s disintegration.

Other highlights of the April 2016 edition:

• Paul Tucker, chair of the Systemic Risk Council and former deputy governor of the Bank of England, discusses geopolitics and the role of the dollar.

• Darrell Delamaide, US editor, explains how arguments between US interest rate hawks and doves are heating up again.

• William Keegan reviews a book by Mervyn King in which the former BoE governor extols the virtues of intensified holdings of collateral by commercial banks.

The Bulletin is available to OMFIF members, and to non-members on a subscription basis. To subscribe please contact: membership@omfif.org.