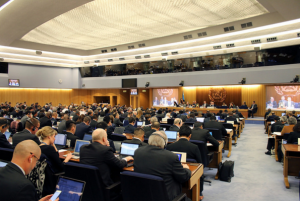 A view from MEPC’s opening

IMO’s Marine Environment Protection Committee (MEPC) is meeting for its 69th session (18-22 April). Among the items on a busy agenda, the MEPC (photos) is set to consider the implementation of the International Convention for the Control and Management of Ships’ Ballast Water and Sediments, which is close to reaching entry into force criteria. There will be further work on the energy efficiency of international shipping, including the development of the data collection system for ships’ fuel consumption.

Following the adoption of the Paris Climate Change Agreement, and building on the discussions at its previous session, the MEPC will further consider a proposal for a work plan to define international shipping’s contribution to the global efforts to address climate change. A proposal from the Philippines to designate the marine area known as the Tubbataha Reefs Natural Park, located between the islands of the Philippines and North Borneo, as a Particularly Sensitive Sea Area (PSSA), will be put forward.

The MEPC will also consider establishing an effective date for the application of the Baltic Sea Special Area under MARPOL Annex IV (Prevention of Pollution by Sewage from Ships). The MEPC was opened by IMO Secretary-General Kitack Lim and is being chaired by Mr. Arsenio Dominguez (Panama).