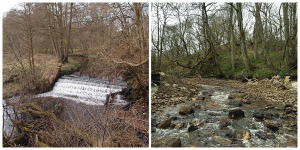 A project to reintroduce salmon to a stretch of river in Wensleydale, North Yorkshire has been given a boost thanks to a £15, 000 donation from Associated British Ports (ABP).

The Yorkshire Dales Rivers Trust (YDRT) has used the funds to remove a weir, which is located on a remote section of the River Burn on the Swinton Estate, near Masham. The weir represented a significant barrier to the upstream movement of migratory fish and the removal has now opened up an additional 5.5 km of good quality salmonid nursery and juvenile habitat.

ABP is currently working with The Yorkshire Dales Rivers Trust (YDRT) which is in turn working in partnership with the Ure Salmon Trust (UST), to distribute a grant fund of £180, 000 in the Humber River Basin that will increase the chances of migratory fish successfully migrating and spawning.

The partnership was established in order to support populations of migratory fish in the Humber as part of the Greenport Hull Alexandra Dock development, which will see ABP and partners Siemens establish the UK’s first offshore wind turbine manufacturing, assembly, service and installation facility.

ABP Head of Projects Humber, Simon Brett said: “It’s essential that any works carried out as part of the Alexandra Dock project have as little impact on the natural environment as possible and migratory fish such as salmon and trout, which use the Humber to travel to spawning grounds and back again, were identified as species that may require additional support.

“Working closely with the YDRT means we can identify those areas and projects within the Humber River Basin that will benefit most from the funding and the weir at Breary Banks on the Swinton Estate was one project of many that we have been involved in. It’s fantastic to know that these salmonid species will once again be able to travel up the River Burn unhindered.”

Other species which are also expected to benefit include seatrout, brown trout, grayling, elvers, bullhead and stoneloach and brook lamprey.

Over 30, 000 salmon smolts have been released into the River Burn by the UST in the last two years, meaning adult salmon will be returning to the Burn system over the next few years. It is therefore important that they have access to suitable spawning and nursery areas.

At the end of March 2016 contractors carefully removed the weir and the river has naturally begun to profile, with the release of gravel from behind the weir. Fish monitoring studies will be undertaken over the next five years to determine the success of the project.

River Manager for the UST Dave Bamford said: “We’re enormously grateful to ABP for providing this funding, and to the Swinton Estate for allowing the project to go ahead. This work is going to make such a difference by allowing a variety of fish species further upstream into some of the most suitable habitat in Yorkshire. I am also certain that come the autumn when the fish go upstream to spawn, we’ll see salmon further upstream than we have in many years.”