How to get cracking with fracking 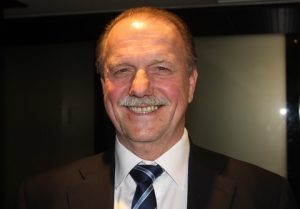 How to get cracking with fracking: Proppants Investment Forum in the City hears the options

Fracking – the hydraulic fracturing of solid ground to reach for oil and gas – has recently sometimes hit the financial rocks as a result of the collapse in commodity prices.

The decline in the sector has led to a shortage of proppants, the sand-like substances used to prop open fractures caused by high-pressure pumping of fluid into the hydrocarbon-bearing shale.

This is a surprisingly huge challenge, as delegates to the first Proppants Investment Forum in the City of London, heard. Proppants are the largest single cost item in the fracking process.

Gabriel Didham, managing director of corporate research business Objective Capital, who organised the forum, said that as a result of the woes of the extractive industries, many of the high-end proppant manufacturers had closed their factories, but he added: “as investors, we know that where there is disruption, there is opportunity.”

The gathering heard an analysis of the global proppants industry, estimated at $6bn to $8bn ($2.3bn of it in North America), from Alison Saxby of independent consultancy Roskill; and from executives of an Australian Stock Exchange-listed company LWP Technologies, which has begun to commercialise what it calls a “superior alternative” to the commonly-used types of proppants. It is claimed that new technology could dramatically reduce fracking costs.

Ms Saxby, director and manager for industrial minerals research at London-based Roskill, told the meeting, on April 21 2016, said that horizontal drilling to squeeze out oil and gas from rocks dated back to the 1930s, but the system took off in the 21st century so that by 2010 there were more horizontal than vertical rigs in the US. More than 1m wells that would not have been economic earlier were drilled using fracking, which involved vertical drilling to between 5, 000 and 10, 000 ft and then a turn above the target area. 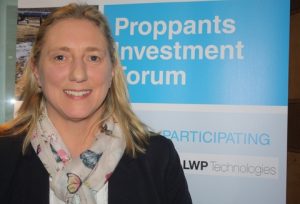 Ms Saxby said that the average total cost of a horizontal well was between $6.5m and $9m – costs that were driving innovation in drilling and fracking.

There were three main types of proppants: silica sand, resin-coated sand grains and ceramic materials. Others included walnut shells and glass beads. If you asked someone from the industry, the ideal proppant had the specific gravity of water, the strength of iron and was cheaper than dirt. Ceramic proppants were a high performance product at a premium price. They were stronger, more durable than other forms and of uniform density. There were relatively few producers worldwide – they were mainly in the US, Brazil, China (more than 100 manufacturers) and Russia.

Output of shale gas, light oil and oil sands was increasing, and all will need proppants in the extraction process. “We need energy from different sources, and fracking is an important part of that, ” said Ms Saxby. “Renewables are not going to represent a big enough share to fill that gap.”

Analysts at the forum said that there were 5, 000 wells in the US that were “drilled but not fracked, ” and Siegfried Konig, executive chairman and driving force behind LWP Technologies, said that companies wanted to hold on to their acreage.  “Everybody agrees [the wells] are going to be fracked some time when there is an oil and gas recovery.”

He went on: “Everybody in the US knows that the rig count has fallen off a cliff, but the output per rig because of the adoption of new technology is up significantly. In the US 200 rigs are producing 30% more than when there were 1, 000 rigs drilling.”

He said that LWP, which has a market capitalisation of A$12m, had spent eight years developing a technology originated by the University of New South Wales. The technology recycled fly ash, an abundant by-product of coal-fired power stations. Some $16.5m had been invested in developing the technology, including significant support from the Australian government.

Traditional ceramic proppants made from clay and/or bauxite were often transported thousands of kilometres to end-users. The most widely-used fracking material is sand, but not any old sand. It has to be sand that has withstood the weight of glaciers over centuries, and high-grade silica known as Ottawa sand is the leader in that context. Mr Konig said that his company’s product would be able to compete with mined sand in some locales because of “low transport and logistics costs.”

Fly ash-based proppants were 100% recycled material, 40% lighter than bauxite proppants and could withstand the high pressures and heat of deep wells. The raw material was abundant and often near oil and gas shale resources. The main use of fly ash is in cement.

LWP designed, built and commissioned an A$3.5m paid-for 3, 000 tons per year pilot-scale proppant plant which was completed in the fourth quarter of 2015 in Brisbane. The company raised A$6.6m in July 2015. It has a first joint venture with Hallmark Minerals at a plant in Pune, India, which previously manufactured ceramic-based proppants, and where the start of fly ash proppant production will depend on the international oil price: production will need to be pre-sold a year in advance.

LWP is inviting enquiries from companies to partner it in joint ventures and from technology licensees to commercialise its proppants in global markets.

Mr Konig rejected criticisms of the fracking process. He cited a well treatment monitoring study by the USDepartment of Energy National Energy Technology Laboratory which found no evidence of damage to groundwater; he said that common chemicals used in the process “are not toxic at all”; and that earthquakes “are another fallacy: there is no proof.”

Dr Henson, a former Siemens Oil & Gas man, said that Saudi Arabia, facing a gas shortage, was starting to look at fracking and importing sand from the US. Sand was being imported by Australia from Minnesota  – “there is plenty of sand in Australia, but there is no glacial sand. The purest source is Minnesota.” Often more than 50% of the price of a proppant was associated with moving the product to the point of use.

Fly ash comes out of every coal-fired power station, 455 of which were still active in the US, and a form of energy showing growth in China and India, said Dr Henson.