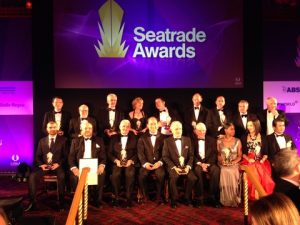 The Winners of the 2016 Seatrade Awards

Eminent figures from across the shipping industry gathered in London’s Guildhall last  Friday night to honour the achievements of the past year and the distinguished careers of winners at the 28th Seatrade Awards.

The prestigious evening, attended by more than 300 of the industry’s leading personalities, was hosted by Editor of Seatrade Maritime Review, Bob Jaques, in the presence of the guest of honour, IMO Secretary-General Kitack Lim.

Among those collecting awards were key industry names that included:

IMO Secretary-General Kitack Lim commented: “Each year shipping faces an ocean of challenges. Some planned and some unpredictable. It is our task, together, to navigate these with all the skill, dedication and cooperation that we can muster. This is why it is so encouraging to have these Seatrade Awards as a vital reminder of shipping’s ability to tap into rich currents of innovation and excellence, because by recognising and celebrating those who have demonstrated a clear ability to make improvements in key areas such as safety at sea and clean shipping, others may be encouraged to strive for similar achievements.”

Quijano accepted the Seatrade Personality Award as recognition not of himself but of the 10, 000 staff of the Panama Canal Authority, the 40, 000 people who had worked on the expansion project over the last nine years, and finally ‘”the Panamanian people” where an overwhelming 77% majority had backed the project in a national referendum. ‘This is a gift to them, ” he said.

The awards, in time old tradition, remain a secret until the night and are unveiled to great fanfare and celebration.

All the Seatrade Awards 2016 winners:

6.Deal of the Year

A reassuring message from Panama