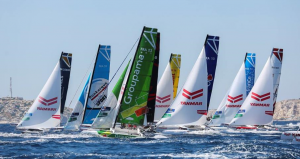 Diam40 OD boats offered a breath-taking show in the first races of the season. The Tour de France à la Voile’s future competitors showed their potential at the Spi Ouest France, Grand Prix Atlantique, Grand Prix Guyader and Grand Prix de l’Ecole Navale. Talented crew were revealed, such as Team France Jeune, Lorina Limonade Golfe du Morbihan and Grandeur Nature Véranda, who won in every one of these races. The playing field is competitive and there will be no room for error on the water. The sailors will have to be at their best technically, find the good speed and not let the pressure get to them during the 20 racing days if they want to take the line honours in Nice. Which of the 28 teams will follow Spindrift’s footsteps, winner of the last year’s edition in Diam 24?

All competitors were gathered in Paris this Tuesday to discover the coming innovations – both on the water and on shore.

What’s new for the sport?

Racing rules have been modified to make the Tour de France à la Voile always more readable and spectacular. During the inshore races (called ‘Nautical Stadium’), all starts will take place under black flag and a ‘Super Finale’ will decide the winners of the day.
With a black flag on every inshore start, no mistakes are allowed. All boats showing up on the start line too early will be disqualified. The Super Finale will then see the winners of the qualifiers face each other daily, and the first one to cross the line will be the day’s winner.

A new reward: the Finagaz Price for Combativeness
Because worthy teams are not always on the podium, this Finagaz Price for Combativeness will be awarded to the sailors who’ve achieved something remarkable. It will be presented once per act and will reward sailing values. Michel Desjoyeaux will be its ambassador.
What’s new for the spectators?
Spectators will be at the heart of the Tour de France à la Voile 2016. The Spectator Area, live program, paddock development (six in nine acts this year) and gifts to win will engage the spectators in this summer adventure.

The Spectator Area will be ideally placed to follow the show on the water. It will be a leisure area with a perfect view over the racing zone installed in every stopover. Daily live programs will be broadcasted from 3.30pm to 4.30pm on a giant screen in the middle of the race village and on internet, helping fans to better understand the nautical battles. Renowned hosts will jump in from the water and on shore.

There will be many gifts to win, too. Spectators are spoiled in this 2016 edition, with a draw organised by the official partner Triominos at every act. There are nine cars to win through the entire duration of the event.

The promotional Caravan will follow the French coastline, giving away goodies and candies. It’s been a great success since its launch in 2013, covering nearly 1, 000k every summer while meeting the fans.

Finally, every crew will race with onboard cameras to share and deliver more footage. Yet another way to experience spectacular racing up close !

Dropping BDI alarms all stakeholders except…