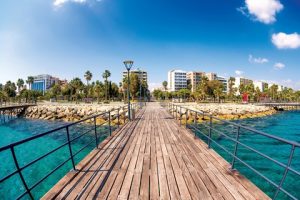 From Christodoulos G. Vassiliades & Co LLC on the issue of  the Non Domiciled Concept:

A Cyprus tax resident individual who spends more than 183 days in the Republic of Cyprus would only be liable for Income Tax Law purposes and would be exempted from Special Defence Contribution (SDC) given that such individual is not considered domiciled in Cyprus.

Consequently that individual would be exempt from SDC regarding income from dividends, interest and rent irrespective of whether such income derives from sources in Cyprus or abroad.

In this manner, and also bearing in mind the exemptions applicable under Cyprus Income Tax Law, dividends and interest received both from Cyprus and worldwide sources would be totally exempt from tax in Cyprus.

An individual is not domiciled in the Republic of Cyprus if:

Personal Income tax rates for employment income in Cyprus vary from 0 to 35% (the first €19, 500 earned being tax free) with the following exemptions:

50% exemption applies to non-resident individuals who reside in Cyprus for the purpose of employment with income exceeding €100, 000 per annum for a period of 10 years.

20% exemption on the remuneration received, with a maximum amount of €8, 550 from any office or employment exercised in Cyprus by an individual who was not a Cyprus resident before the commencement of the employment. The exemption applies for a period of 5 years but it can only be claimed until the year 2020.

Pension received in respect of past employment exercised outside Cyprus is taxed in Cyprus at a rate of 5% on amounts in excess of €3, 420;