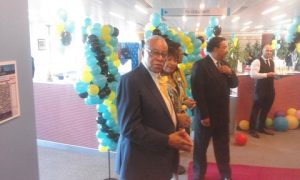 What a great event that was earlier on tonight at the IMO!  Over 300 guests amongst them many Bahamians in London participated in the celebrations for the occasion of the 43rd Anniversary of Independence of the Commonwealth of the Bahamas! John Faraclas was there with his camera:

At the specially for the occasion decorated 4th floor at the IMO, Shipping’s most important building in the British capital – not to mention all over Planet Ocean, the Bahamas High Commissioner, H.E Mr. Eldred E. Bethel and Mrs. Dawne Bethel entertained us all in modesty but with unique Bahamian style! 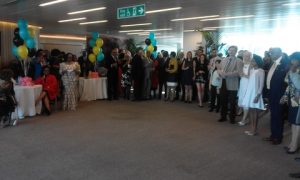 Listening to the National Anthems

After the National Anthems, uniquely performed by Wilfred Addevley (for the United Kingdom) and Syann Thompson (for the Bahamas) and following a nice acting show by Mr. Bethel’s granddaughter Selina Bettot, His Excellency talked*passionately about the Bahamas and its importance to the world  and shipping on all aspects on these last four decades of success! 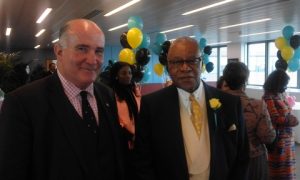 The weather conditions prevailing were unique so the gusts had also the chance to take advantage of the garden veranda overlooking Father Thames and all its surrounding monuments and important buildings, including that of the Houses of Parliament.

Excellent live music and well prepared international food; nice wines and spirits too including some of the best exotic ones that Bahamians re-known for! Don’t ask about the sweets and the freshly prepared fruits!

Among the guests honouring the event IMO’s Secretary-General ​​​Kitack Lim and many heads of IMO national delegations, class society representatives, maritime lawyers. marine consultants and other key players. Richard Moir from the Wealth Forums was there, as were Elisabeth O’ Regan from the French Radio in London, Kayleigh Woodman from the Chesterfield in Mayfair, Kannan Sivanathan from Business Connections in London and many many others. 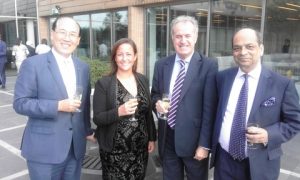 Having spent holidays in the Bahamas during my sister’s 20 plus years there, I was on …home ground and whilst having my special plate of sea-food, had a great discussion with Mrs. Julie Angove Gariba sitting next to me, who latter on gave me her business card only to find out she was the media communications head at the Bahamas Tourist Office in London! Another …trip planned when the circumstances are right!​​​

The Bahamas and its flag rank among the ten best in the world of shipping and I am pleased about such success as back in 1983 I was the first to foresee this growth putting forward relevant proposals to the then government!

The Bahamian Business, Banking and Shipping Services are on a constant improvement modus! 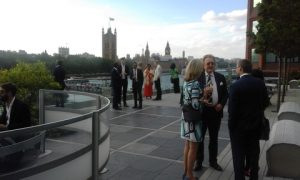 Tourism also offers quite a lot and lately The Bahamas have become the destination in the Western Hemisphere for mega cruise ships!

Now, did I hear you say scuba diving?