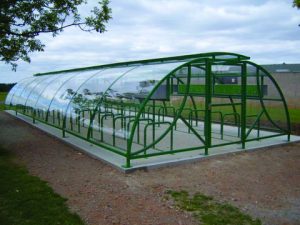 THE summer months are always a busy time for the UK’s Cycle to Work scheme and this year is no different according to workplace equipment supplier Slingsby.

The company supplies a large range of cycle storage products and shelters and this year it has already sold a number of these products to organisations and businesses across all industries as a new wave of employers sign up to the scheme.

Cycle to Work enables employees to save money on bikes and related safety accessories by making them completely tax-deductible.  A recent study by the Cycle to Work Alliance also revealed that 90 per cent of participants in the Cycle to Work scheme believed cycling had improved their general fitness, while 52 per cent had lost weight as a result of the scheme.  In addition, 60 per cent of people said they felt more productive at work, when they cycled in.

Dominic Slingsby, Operations Director at Slingsby, which supplies more than 35, 000 workplace products across all industries, explains: “Cycling has grown phenomenally in the UK since the Cycle to Work scheme was first introduced back in 1999.  Several Olympics successes and the Tour de France crossing The Channel for the Grand Départ in 2014, as well as Bradley Wiggins and then Chris Froome winning the famous race, has boosted the sport’s popularity even further.

“During this year’s Budget, the Chancellor introduced the controversial sugar tax, which stole a lot of the headlines, and while he signalled concerns about the growth of salary sacrifice schemes, he named Cycle to Work as one health-related benefit that will continue.  This is great news for both employers and employees.”

Dominic continues: “As part of the scheme, employees effectively hire a bike from their employer by paying monthly instalments that are taken from their salary before tax.  The hire agreement usually lasts for between 12 and 18 months and then the employee buys the bike for a percentage of its original cost price.

“No forward thinking employer can ignore the potential benefits of promoting health and wellbeing and Cycle to Work is a really simple way of encouraging employees become more active so it’s definitely worth considering.

“However it does mean employers need to cater for the large number of bikes that arrive on their premises every day.  In most cases this involves providing secure storage facilities as well as changing rooms and showers but usually the employee benefits will more than justify this investment.”

For further information on the ‘Cycle to Work’ scheme visit www.cyclescheme.co.uk.